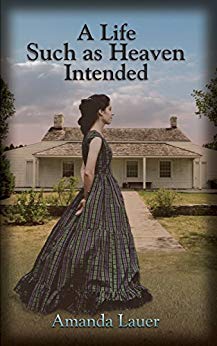 Brigid McGinnis is a normal Southern girl in Dallas, Georgia. She manages the household while her father works in Confederate President Jefferson Davis’s cabinet. One day, an injured Confederate soldier, Dominic is found on her estate, with no memory of

A Life Such as Heaven Intended is a historical fiction novel that takes place during the Civil War. The drama of the Confederate South, along with the budding romance between Brigid and Dominic, create something worthy of an HBO mini-series.

One aspect that makes the drama compelling is Brigid’s character arc. She’s a surprisingly complex character. She desires an education and pursues religious life in the hopes of furthering it. However, she never questions the fact of her neighbors having slaves or even if slavery is right or wrong. She saw it as “just the way things are.” This all changes when she discovers runaway slaves hiding out on her property.

Even though Brigid comes off as condescending to the escaped slaves at first, she is called out on her behavior. The slaves are greatly fleshed out, being educated in their Bible and being more aware of the realities of this world than Brigid is. Brigid manages to do the right thing and helps bring the slaves to freedom. She also finds out that the religious order she planned on joining is helping with the Underground Railroad movement. (Side note: The nuns in this book are the coolest fictional nuns I’ve ever seen since The Sound of Music.)

The romance between Brigid and Dominic is also very sweet. It develops over a long period of time, with Brigid nursing Dominic back to health. Dominic feels like he belongs with her, which is a huge deal considering he was orphaned shortly after immigrating from Germany. There’s also hints of him having PTSD, and it’s managed well.

I recommend this novel to people who like realistic historical fiction, especially stories that integrate real history, such as the history behind the Sisters of Mercy. (Although there is no evidence that the Sisters of Mercy helped out with the Underground Railroad, they are a real religious order.) I also recommend this to fans of historical dramas. There is a bit of a Gone with the Wind vibe here.