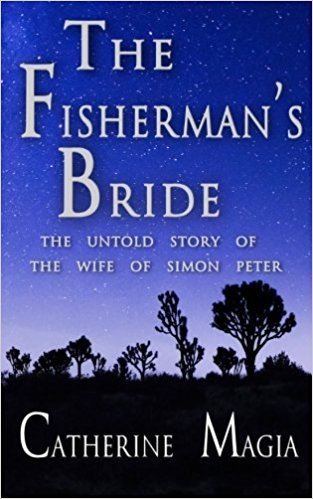 She has no name, or at least, one that is never spoken in the Gospels or this historical fiction novel by Catherine Magia. Nevertheless, she is a force with which to reckon from the first chapter when she defies her father’s business arrangement that she marry a rich but vulgar man who owns a fish processing company. The alliance is meant to form a monopoly to benefit her father’s fishing industry.

Instead, she chooses to marry Simon, a poor fisherman who works for her father thereby ostracizing her from her family.

The novel is written completely from the bride’s point of view. Though I usually cringe at the use of passive voice in any book I read, it seems to fit the storytelling genre. She begins as though recording an event from the past in her journal, then switches to active voice. I see this book as Simon’s wife writing her memoir to validate her existence in history. After all, the only reference to her marriage in the Bible is when Jesus miraculously heals Simon’s mother-in-law.

However, the book is also her biography of Simon, the man renamed as Peter. She chronicles the type of man she sees him to be: his passion for life, his Jewish faith, and ultimately, his love for Jesus Christ.

The marriage is like most marriages with its ups and downs, tragic situations and separations. Simon rules the household and expects his wife to be obedient and compliantly silent in most cases. He respects her ideas, but she must be careful how she presents them. For her, it is sometimes difficult to remember her place.

Magia’s research of the religious culture, politics, and day-to-day life of inhabitants during the time of the Gospels is obvious in her narrative. She is true to history in relating the violent times in which her characters lived when Romans ruled, frequently attacking and killing the Jewish people. Then she fills in the gaps between proven facts with human interactions between her protagonist, her husband, and other real-life people most times related in the Gospels. Though the timeline for the novel is not explicit, it seems to begin several years previous to the appearance of John the Baptist and the public ministry of Jesus.

I think the biggest challenge in reading Magia’s book is reconciling my perception of the Gospels with some of the incidences she describes, but of course, I focus my attention on the apostles, their call to follow Jesus, and the passion of His death and resurrection. Her rendition of the story behind the story of Simon’s mother-in-law is creative and unique simply because she anchors the story in time and place with a description of the relationship between the mother and her daughter. She brings them alive as characters.

When Jesus becomes present in the novel, Magia identifies Simon’s wife as a woman abandoned who finds herself pregnant with her husband’s child but is yet branded an adulteress by the community. She sets out to find her husband and becomes the woman saved by Jesus from being stoned when he says, “Let the one among you who is without sin be the first to throw a stone at her.” Who would have thought the unnamed woman might be Peter’s wife?

If you like historical fiction, this book is well written. Its worldview is from a Christian perspective, and Catholics, as well as Protestants, would recognize its characters, themes, and plot. As for me, I’m still thinking about it which is probably what Magia wants me to do.