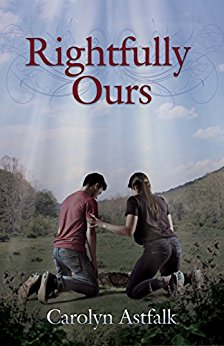 When Paul and his older brother, Sean, start working as hired hands for the Mueller family, Paul forms a friendship with Rachel Mueller that slowly becomes something more as time goes on. When Paul and Rachel realize their feelings for each other, it happens slowly. It’s grounded on their friendship and never turns into an obsessive, stalker-type of love that other young adult romances have. However, getting together is only half of the story.

One downside to the story is that it’s a bit slow-paced. You don’t see much of what’s happening in Rachel or Paul’s lives outside of their relationship. There’s a distinct lack of external conflict, similar to When Harry Met Sally. The lack of external conflict works in When Harry Met Sally because the two main characters are trying to get over past relationships, compare themselves to their friends. However, Rachel and Paul are teenagers and the only external plot that’s in the novel is that they happen to find a stash of gold hidden on the property. While the developing relationship between Rachel and Paul is compelling in and of itself, I wanted them to do more than just garden and look for hidden treasures.

In spite of the lack of external plot, though, the story itself is still engaging. It’s a slice-of-life story, which means that Paul and Rachel won’t be fighting off aliens or vampires or trying to survive in a post-apocalyptic dystopia. Instead, they are allowed to grow up in a realistic and mature way.

The central theme in this novel is the concept of chastity. The concept is explored in the way that Rachel and Paul figure out how they should move forward in their relationship. The attraction they have to each other is genuine, but practicing chastity isn’t just a matter of not doing anything. It’s understanding each other’s true value. Paul realizes it when he and Rachel find out that the gold they discovered actually belongs to the state and not to Rachel’s family, leaving them with a moral dilemma that mirrors the moral choices they face in their relationship.

I recommend this book to young adults who like “slice of life” stories as well as to parents who want to teach their young teenagers what it means to be in a relationship.

I Hope You Find Joy By Eliza Mae Albano

Can Emma find joy with the man who hurt her?