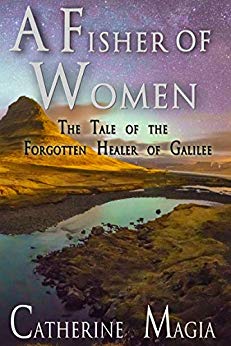 Catherine Magia knows her history and much about the physical world where her novel takes place. Her descriptions of the land and places where Jesus taught and performed miracles transport readers into her highly imaginative tale.  Violence and brutality prevailed in the time of the disciples and Jesus as he pursued his ministry, and it is graphically depicted. This book is not for the squeamish.

The heroine of the story is the wife of Peter, the fisherman. She is never named in the Bible and isn’t here either, but everything that happens in the novel is told through her eyes, important to keep in mind when she reveals her thoughts and emotions regarding the rest of the characters.  The fisherman’s wife, who having met Jesus the teacher, becomes one of his followers. Against the wishes of her husband, she takes their child and travels in the caravan with the disciples.

Her relationship with her husband is rocky based on his abandonment of her and their child when he became an apostle. Though she loves him, she finds it hard to forgive him. Her encounters with him often portray him as cold, unfeeling, and sometimes a bit abusive to a wife who is strong and independent. Quite frankly, her relationship with Judas Iscariot who comes to her rescue more than once, is warmer and more compassionate. It is a little unsettling, to me at least, to see Judas depicted as a romantic figure for whom the fisherman’s wife develops feelings.

Love, of course, is the strongest theme. Peter’s wife wants to love as Jesus does; yet, she struggles with her revulsion at some of the people healed by Jesus whether it is a woman dragging her bloody body to touch his tunic or the tailor with the shriveled hand and mute daughter condemned by the crowd as sinners. Anyone familiar with the Gospels will recognize the people included in the novel, albeit given Magia’s fantasy twist through dialogue and story development. Her characterizations of the other apostles and especially the women such as Mary Magdalene are easily believable.

Most of the women who follow Jesus are strong like the fisherman’s wife. They take care of their families and especially their master who suffers greatly when he performs his miracles. That is the secret kept from Peter and the other apostles. Magia’s Jesus experiences the fevers, the lesions, the paralysis, the blindness of every person he heals, all because of his great love. The point of this fictional element relates literally to Isaiah’s description of the suffering servant. and presents the idea that Jesus actually did suffer the ailments of those he healed and to further drive home the theme that to be like Jesus, we need to love the gruesome, the gross, the sick, and the poor.

One pivotal episode takes place when the apostles are unable to heal the demonic son of a merchant. After Jesus dispels the demon, the others lament in despair at their failure. He chides them on their lack of faith, but as the women listen, they silently pray. The fisherman’s wife realizes the extent of his ability to love and the cost he pays for others. She surrenders herself totally to Jesus.

Along the way, she meets a former acquaintance suffering from leprosy. Her compassion and love give her the gift of healing, but like Jesus, she takes on the disease of the sufferer. Then it is up to her husband to save her life by learning to love the same.

Explore all of Catherine Magia’s Books on Catholic Reads Here

The novel is interesting and well written, but sometimes I found the fantasy disturbing when the story deviated from the Gospel accounts. I question her reliability as a narrator, though admire her honesty in relating her revulsion of those healed.  As I was reading, I was reminded of Katniss and the Hunger Games series: this is not a story for a weak stomach. Although I know Peter stumbled more than once in his decision-making, here he is portrayed to be negative and mostly self-serving. I understand the duality of Jesus as both human and divine, but here his character seems weaker than the radical speaker of truth.

The genre is historical fiction with a Christian worldview. It would be of interest to young and other adults, but it might be misleading to those who are not familiar with the New Testament as Magia takes great liberties in developing the story.