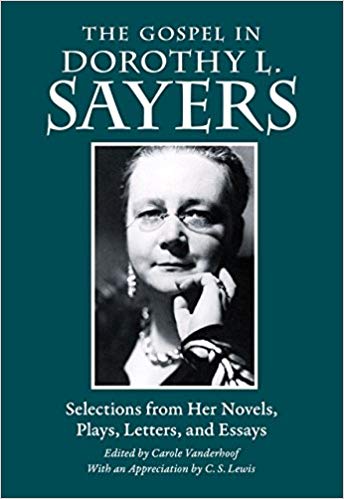 Dorothy L. Sayers (1893-1957) wrote well in a variety of genres, but she made a living and a name for herself with her detective stories.  Anyone who enjoys witty whodunits in the best British style will like Lord Peter Wimsey, her debonair, aristocratic, amateur sleuth.  Launched in 1923 with Whose Body?, he solves fourteen book-length mysteries and a whole collection of short story puzzles over the course of his detective career.  Lord Peter’s character becomes more complex in Strong Poison, when he falls in love with Harriet Vane while extricating her from a murder charge.  The relationship between these two characters lends depth to several ensuing stories.

All of the Wimsey books are good, but The Nine Tailors is something more.  On one level, this story is a perfectly crafted brain-teaser, weaving a murder and its detection through the intricacies of campanology (the art of ringing church bells).  But at another level it touches on deeper mysteries: faith, and how we hold onto it in the face of overwhelming odds.  The Anglican minister in the story, Mr. Venables is based on Dorothy’s father, who was also a country rector.  Through this character’s perspective, the story explores the Christian roots of English culture.  It proclaims the unity of the Church through time despite political and theological schism.  The Nine Tailors describes the community of parish Fenchurch St. Paul pulling together to face an ordeal.  In 1934 by implication the story called readers to face with a spirit of camaraderie the war looming on the national horizon.  The explicitly Christian framework of the solidarity of the isolated village still speaks to any reader seeking to put faith into practice within a community.

During an air raid after World War II broke out, Dorothy grabbed a book to take with her to the shelter.  Getting there, she realized that she was holding the first volume of Dante’s trilogy: Hell.  She had always been a Dante fan.  Lord Peter had added a rare Folio Dante to his collection in her very first novel.  But reading Hell during an air raid was a turning point in her life.  She felt that she could no longer compose lighthearted mystery novels, and she began devoting her talents to more explicitly religious works, although even in her theological essays she always retained a humorous approach.  The Whimsical Christian collects some of her best, most cogent and wittiest articles.  Don’t miss The Dogma is the Drama.  If you’ve ever found yourself saying the Apostles’ Creed and sort of wishing you understood it, this gem is for you.  You’ll get a good laugh out of what the Creed is NOT, on the way to a better understanding of what it is.

After the war,  Dorothy returned to Dante—as a scholar.  Her Penguin Classics translation of The Divine Comedy still offers the most accessible version for any ordinary reader in English, with the best explanatory notes.

If you enjoy discovering the truth, and take pleasure in exercising your wits to get at it, you’ll like Dorothy L. Sayers.  In all her work there is a sheer joy of intellectual action that appeals to people who like to think, and who prefer getting the right answer to being right. In everything she turned her hand to, she was acute, clever, and conscious of her own failures.  Looking back on her life, like the hero in The Divine Comedy she could say:

Midway this way of life we’re bound upon,

I woke to find myself in a dark wood,

Where the right road was wholly lost and gone.

Her experience of personal redemption endowed her with the humility to take herself humorously, and the wisdom to take God seriously.