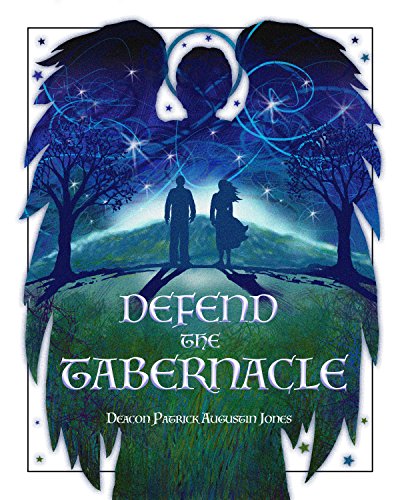 Be prepared to enter into a world in the fashion of C.S. Lewis’ The Great Divorce, with a plot infiltrated by Screwtape-letter-intrigue.  Defend the Tabernacle by Deacon Jones is a unique composition of adventure, theology, and self-reflection, capturing the imagination and taking hold of the soul. In a blink of an eye Deacon, Jones introduces the reader into Soulscape where demons are fought hand to hand, and the troubled souls can be persuaded by the protagonists’ prayers and charitable action. With vivid colors and exaggerated imagery, the Deacon presents a realm fun to explore and enter into with the characters. Each event in Soulscape references multiple classic and popular fantasy worlds from novels or tv. Identifying his references not only made his scenes fun but opened my mind to consider the referenced stories in light of the current one. He engages both the imagination and analytical mind making each soulscape scene intense and feels like a real spiritual battle within your own soul. And while the exaggerated world of soulscape is fun, colorful, and exciting, it was the intensely familiar description of the main characters more than the fantastical setting of Soulscape grabbed my attention.

The female protagonist, Catherine, is the typical conservative, homeschooled, scrupulous Catholic University student, tinged with an annoying douse of intellectual pride, a bit of uptightness, and a fear of intimacy and relationship. Her blindness to her own faults and the Deacon’s incredibly accurate portrayal of the typical homeschooled Catholic university student had me mesmerized. Would she let go of her pride? What difference would her faith make in light of her pride? How does faith make a difference in the world? The male protagonist Bernard is a stereotypical “bad boy agnostic” who is easily aroused by his senses, humorous in a cool unexpected way, a bit irresponsible but filled with a good dose of down to earth common sense, and a chill disposition that made me want to roll my eyes. But if Catherine was an accurate description, Bernard’s description probably was too. He appeared unreal to me but just as her faith plants a sprouting seed in him, his character becomes the perfect foil for curing Catherine’s blindness and pride.

With Barnard and Catharine, the reader enters in and out of Soulscape, a spiritual realm where both the landscape, wildlife, items, and one’s physical appearance and activity, reflect the spiritual state in which a soul exists., and that of the ordinary worlds of Denver & Benedictine college life. As the protagonists enjoy their mystical adventures together fighting to save souls, they learn to appreciate each other’s gifts, contrasting abilities, and unique perspectives of the world around them. Expectedly, they fall in love, and the Soulscape slowly turns to become more personal. As the protagonists continue to jump in and out of Soulscape, the Benedictine College Chaplain Fr. Gerard joins the students as they face more challenging prospects, Bernard grows stronger and stronger in the Catholic faith, and Catherine’s eyes are opened to a whole new world as she sheds her fears and takes up humility.

My favorite parts are when Bernard, new to the concept of ‘Communion of Saints’, becomes so excited about being able to communicate with Catherine and Fr. Gerard just by the thought that he compares it to a three-way call, and being online and offline. But it is not just Bernard’s joy in learning more about the fullness of the Catholic Faith, but also the contrast of Catherine and Fr. Gerard, who appear to be phased in no way at all by this incredible means of communication. This contrast of characters awareness made me laugh, for I hadn’t really considered such telepathic communication to be that unusual just as Catherine and Fr. Gerard do, for I am also familiar with the Communion of Saints. Yet Bernard’s fresh perspective is powerful, for it is through Bernard’s conversion the Deacon wakes up those who have lost the wonders of God’s ways of love.

Although each scene contains images and action which paint a mural, the Deacon’s book is really less of a novel and more of a collection of parables, illustrating the different challenges and situations afflicted souls experience. He decidedly writes to an audience familiar with the Catholic culture and challenges them to deepen their faith through theological facts and humbling analogies. But while parts in this book are noticeably informative, Defend the Tabernacle is nowhere near dull.  Deacon Jones paints scenes explicating the perils, pains, and consequences of sin, as well as the joy and healing of grace.

For me, this book, with its parabolic scenarios, honest expressions of each character, and believable hilarious dialogue, took me to places I have never been and made me re-examine my ways which God knew needed some T.L.C. The spiritual warfare and challenges the characters encounter are very real. There is a little wisdom in this composition for everyone. This book is good for those who can relate to being a typical Homeschooled Catholic University student, (and probably those who relate to Bernard’s character too) as well as any Catholic who wants to explore their faith a little more deeply, and are willing to take an honest look at their own Soulscape.