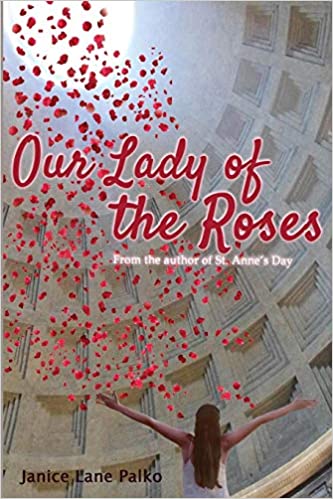 Bob White reluctantly entered Jannetta Orlando’s salon, La Bella Figura, for a couples’ makeover―alone. He’s headed to Rome in the hopes of selling his invention. Only, just before the trip, his girlfriend who scheduled the couples’ makeover breaks up with him. Few places prompt individuals to spill the beans about their current situation like a salon chair. Bob tells Janetta about his trip, the invention, and his anxiety over not speaking Italian. His girlfriend Connie was supposed to be his translator. Janetta gushes over Rome, the city where her parents were born and raised. She even hints at her jealousy over his trip. Before the cape comes off, Bob offers to pay Janetta to be his translator.  After a moment or two of thought, Janetta accepts. Lucky for Bob, she has two weeks off, thanks to a girls-getaway cancellation. It seems perfectly simple. Well, maybe not so simple.

I love an opposites-attract romance novel. No one is putting on their best clothes and smiling, hoping for fireworks. Yet the sparks fly anyway. Palko gives us two characters, Bob and Janetta, who have nothing in common and sends them to Europe. If the two had met at a soirée, they would have parted ways without a moment’s thought. Traveling to Rome together forces daily interaction, whether it’s enjoying a gelato in the hot sun or arguing over clothes. The two see each other for who they truly are.

Janetta craves la dolce vita. She hopes to find a man in Rome, one that will sweep her off her feet. At Bob’s business meeting, she meets Giuliano Legato. With one look she falls head over heels for him. As it turns out, Giuliano is just another of Janetta’s bad relationships. Worse yet, her actions affect Bob’s business dealings.

Bob is an intelligent, thoughtful man with much to offer, even though Janetta initially sees him as a boring man. His Catholic faith is the center of his life. Others’ needs come before his own. Bob needs this business deal to go through, but when Janetta’s dalliance with Giuliano is exposed, insults fly and Bob takes Janetta’s side like a knight in shining armor. Yes, Janetta made a mistake, but she still deserves respect.

Bob may appear dull, but Janetta has never been around a man quite like him before. He’s strong, masculine, and supportive. While accompanying Bob on his mini-pilgrimage, a conversion begins in Janetta. She starts to become ashamed by her past relationships with so many men. To escape the rain, Janetta enters a church dedicated to St Joseph. Her thoughts turn to Bob. He protected her dignity, bought her roses, and took her to church. Bob was like the bride-groom of the Blessed Virgin.

Janetta and Bob are an unlikely but great couple. From the very beginning you can see the attraction between the two, even when they argued. Instead of giving into physical attraction, they take time to get to know one another, and love flows. Janetta’s newfound devotion to St. Joseph was my favorite part of the novel. I recommend this book all Catholic women, married or unmarried. It’s a fun read with lots of Catholic tie-ins. Non-Catholics will love the comedic and virtuous relationship between Bob and Janetta.