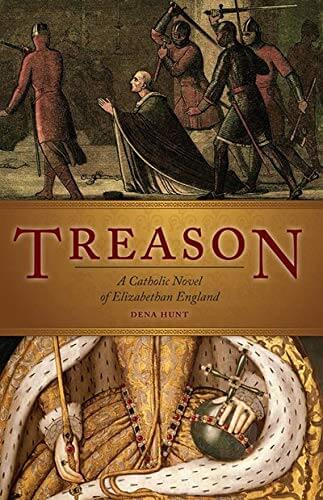 In Elizabethan England, to be a Catholic is treason. To harbor a Priest is treason. To show sympathy or mercy to Catholics, or even to have vestments in the house is treason. Hunt sets her tense near-gothic novel in such a world. At the start of the book a poor farmer finds five village Catholics praying the rosary in his barn and kills three of them, the last two barely escaping with their lives. The local authorities are horrified at the man’s crime and what it could mean for their sleepy town.

One thing I appreciated greatly about Hunt was how she deftly shows that the earliest English anti-Catholicism wasn’t personal but political. Most of the Protestant & Atheist characters harbor sympathy and grief for the suffering their Catholic neighbors are going through and have friends and even family that still practice the faith. The Anglican priest in the town himself secretly wishes that he could have found peace and quiet as a monk in the now ruined & razed monasteries of the countryside. The local atheist magistrate suffers from PTSD nightmares of attacking innocent Catholic children on his naval raids on the Spanish coast. Though many in the town find the Queen’s rhetoric intoxicating, many other kind souls know that it should be no crime to follow the compulsions of one’s conscience. Throughout this suspenseful book there is the sense of a country grieving for its soul.

In order to avoid bringing down destruction on the few openly Catholic locals, the authorities attempt to downplay the events in their reports, letting the murderer go free if he hides the fact that two Catholics got away. The three who were martyred are given a burial in the local church. When one of the men wonders if it is prudent to bury treasonous Catholics in hallowed ground, the Anglican minister sharply reminds him that most of the bodies in the churchyard are Catholics already, that his very church building was a Catholic one before it was stolen, its windows smashed and its statuary burned or sold at auction.

The local’s kind efforts however are hindered when agents from the Crown itself arrive to investigate the matter and hunt down these hidden Catholics. It couldn’t be a worse time because the region’s new young priest has just been smuggled on shore and must dodge their trail if he is to make it to his new diocese. Without him the whole region would be without the sacraments. Now he must introduce himself to the community by bringing them the sad tidings of the murder of three of their own.

Meanwhile the mother of one of the martyred Catholics is waiting anxiously at home for the return of her daughter. Her daughter had left on a mission as a courier for secret messages among the region’s hidden Catholics, but was due to return by now. The mother must hide her anxiety from her neighbors and pretend to join in with them in defaming a local old widow who was recently hanged for having a priest’s vestments in her house. The mother knows that this widow wasn’t a Catholic, but acquired the stole when a local church was looted and probably only meant to sew the pretty lace into a dress or something. Still, she cannot reveal any of this.

Readers curious for a glimpse into pre-Protestant England, and all the treasures lost to that world will find Hunt’s book hauntingly beautiful and detailed. I didn’t know, for example, that the quintessential English Inn developed in direct response to the Anti-Catholic persecutions. Before travelers, rich and poor, knew they could find free hospitality at the many beautiful monasteries that littered the countryside. After the persecutions began those monasteries were either destroyed or claimed by the royal family for use as their own castles. Inns rose to fill the need for travelers, but they were never as accessible to the poor as the monks had been.

Be you Catholic, Protestant, or Atheist these insights are rare and interesting to see. Anyone with an interest in English history will find Hunt’s suspenseful novel a fascinating read.