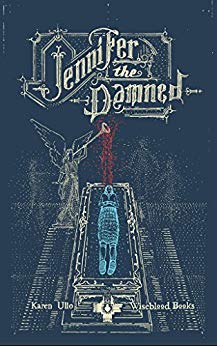 The first thing I thought when I read this: “How the heck can a vampire get pimples?” Jennifer the Damned takes everything you think you know about teenage vampires and throws it right out the window with a very relatable “reluctant vampire” who is trying to blend in with her classmates in a typical Catholic high school as well as the convent where she lives. Unfortunately, when her thirst for human blood overpowers her, she starts to lead a double life that leads to a loss of her identity.

One thing that I love about the story is all the supporting characters. The nuns in this story remind me very much of the nuns I had in childhood: loving, but very stern, caring, and utterly unaware of the darkness in Jennifer’s soul. (Honestly, I’m surprised there weren’t any characters who were genre savvy outside of Jennifer herself.)

Jennifer falls in love with genuinely good guys, but she doesn’t go into the angsty human/vampire relationship with anyone. The only prominent guy in the story that actually affects Jennifer’s life is Jeremy, who is more of an antagonist and a bad influence in this story, as he encourages her to run away and ignore the consequences of her actions, embracing the life of a vampire as his own.

Unlike other vampire novels, Jennifer the Damned treats death with the gravitas and consequences it deserves. Jennifer doesn’t revel in killing people, but fresh human blood is the only thing that can sustain her. No “vegetarian” vampires here! The story doesn’t hold back from how Catholic it is, either. Jennifer thinks that she’s condemned to hell for the sole fact that the vampire that “turned” her ripped her out of her birth mother’s womb, hoping to create a young vampire in her own image.

The only issue I have with this novel is how it ended. I’m very glad that Jennifer was able to find forgiveness for her actions, but I wanted an epilogue to see what life was like for Jennifer afterward.

I recommend this novel for anyone who’s a fan of the “tragic vampire romance,” especially young adults who are fans of things like Twilight and The Originals. It’s also one I would recommend to Catholics who may not consider themselves horror fans. While some may disagree, I think this novel could serve as a bridge between non-Catholics and Catholics. Secular readers have responded well to this story and I think it’s because ths story brings a fresh new take on what is considered an oversaturated dead genre.