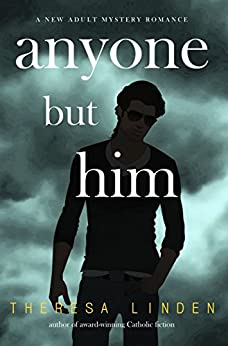 What if you woke up one day and didn’t recognize the person you were sleeping next to? It sounds like the start of a bad joke, but that’s exactly what happens to Caitlyn in Anyone But Him, a story that feels more mystery-thriller than comedy. Caitlyn finds herself married to Jarret, a guy who had a bad reputation in her high school days. This totally freaks her out because in her eighteen-year-old mind, she wanted to marry Jarret’s brother.

There are two mysteries that Caitlyn must solve: How did she end up married to Jarret? And how did she lose her memory? One of the answers ties into her job as an investigative reporter. Caitlyn’s investigation of an abortion clinic becomes a potential lead to solving her own mystery.

The romance between Caitlyn and Jarret is refreshingly realistic. It’s not a picture-perfect marriage, given how jealous Jarret gets and their lack of communication. However, once Caitlyn starts regaining her memories, the truth of the relationship is revealed. Their love developed over time. Best of all, Jarret became a changed man through his relationship with her.

I’ll admit that I found the “culprit reveal” a little out of nowhere, but I love the legitimate suspense and the overall mystery.

Fans of “Lifetime” romantic suspense movies will find this book to be a major upgrade because the main love interest isn’t the bad guy, even though readers might think so initially. Catholics and non-Catholics alike will enjoy the realism of the marriage that Caitlyn and Jarret have and how the two of them renew their love for each other. Abortion and the shady ways clinics skirt the law are brought up, but in a way that works with the plot and doesn’t feel “ripped from the headlines.”