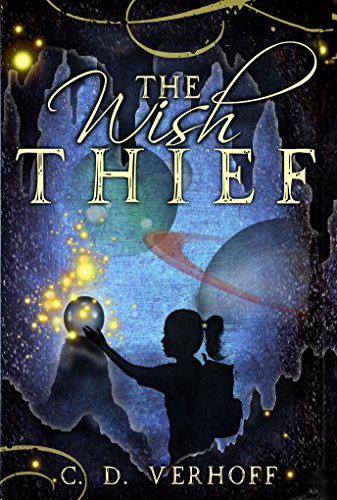 The Wish Thief is an older work from one of my favorite Catholic authors, C.D. Verhoff. Her book Comet Dust was reviewed on this site a while back. I was fortunate enough to do some editing work on it, and it remains a favorite.

This earlier work follows the adventures of Glory Alley, a poor girl in a troubled family on an earth-like planet called Tullahn. Mocked at school, constantly tormented by her brothers, verbally abused and sometimes beaten by her father, and all but ignored by her sister, Glory longs to mend her broken family. Once, they had a normal life, but four years earlier her mother died giving birth to her youngest brother, George. Since then her father has descended into alcoholism, and the family has quickly spiraled apart.

When not at home or school, Glory spends her time with her best friend, Clash, usually exploring the caverns of Queen’s Mesa. Her hope is that one day, she’ll find some valuable gems that will give the Alleys the money to either get themselves back together or for Glory to escape.

After fleeing home one day, Glory goes to the Mesa by herself. There, she finds a large, beautiful stone of unknown origin. She also finds the Hoogula, a giant, supernatural, dog-like creature tasked with guarding the stone. Glory manages to get away, but in doing so sets into motion a series of events that threatens her family and even entire worlds.

In the following days, Glory encounters three dwarf-like men who have the ability to put people to sleep, travel through magical doorways, and eat squirrels like hot dogs. She eventually learns that they are Wybills, alien creatures sent to return the stone, which they call the Elboni. After she refuses to tell them where it is, hoping to get something of value in return, Glory is taken to their home world of Wyb. There she undergoes many tests in an attempt to force the stone’s location out of her. Rather than giving in, Glory instead learns how to bind a Wybill so that it will grant her a wish.

Much to their surprise, Glory succeeds, and her wish changes her life and that of her family forever. What is interesting is that the wish does come with a price. When she awakes after extracting her wishes from Wybills, Glory finds that her life is now completely different than it had been. Is it better or worse? You’ll have to read to find out.

As always, Verhoff’s writing is engaging and imaginative. It veers into dark territory but is presented in a way that it can still be comfortably shared with most children in their teens. Full to the brim with religious symbolism, The Wish Thief would be a great addition to the library of any Christian youth from the early teens on up.