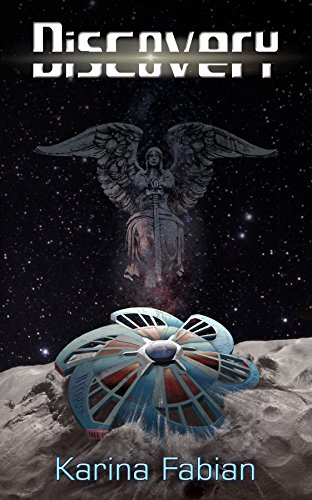 Discovery by Karina Fabian is an adventure romp in which a ragtag team of badass religious sisters, no-nonsense space miners, shady businessmen and quirky academics set sail to recover an alien spaceship found wrecked on an asteroid at the edge of our solar system. Discovery feels very much like a search for Atlantis type storyline but Fabian takes what would be a normal treasure hunt and adds depth to it by exploring the religious diversity that would naturally occur among the team.

The book starts off focusing on the Rescue Sisters- four celibate; habit-wearing women lives to rescue errant travelers from all the different ways you can wreck a spaceship. They are kind of like Road Sid Assistance EMTs in space. Things don’t get really interesting until the team gets together, but that is a problem I have with most treasure hunt stories. When the sisters do meet the team they are joined by a man running from a clear vocation to the priesthood (and nursing a sweet spot for one of the sisters), a lonely Wiccan missing her coven, a Bible-thumping Protestant Preacher, and a whole host of Codists. Codists are “enlightened” academics who have made the list of space safety codes into a Zen Buddhist-like religion. Needless to say, before they even get to the alien spaceship there is plenty of hijinks going on amongst the crew. To make this even more fun Fabian sets the adventure on a retrofitted cruise ship themed around a VR-movie series, with rooms designed around sets from the fictional pop culture media. This weird theme park-like setting gives the story an Indiana Jones-like tone.

Even before they get to the alien ship the stakes are rising. I was beginning to suspect that one of the sisters was an alien, a robot, a saint, or some other kind of strange thing. The genetically altered human doctor is clearly hiding something dangerous, and the shady businessman Dr. Thoren is already sinking his puppeteering claws into the heroes. When the humans to arrive at the alien spaceship they discover a device that essentially reveals the truth about yourself to you- before you’re ready to handle it. For some this truth builds them up but for others, it is utterly destructive—and in the high-risk life of space, if one member of the team falls it could mean the end of all their lives.

One thing that I found confusing at first but grew to appreciate more as the story went on was how Fabian references saints and pop culture media that does not exist yet. It makes sense that a story set in the future would have new saints and video games, yet so few sci-fi authors take advantage of this world-building technique. These details are not just window dressing. Pay close attention because this is where Fabian slips in subtle clues to many of the secrets the characters have.

While an enjoyable read the book is far from perfect. The beginning is slow and I didn’t find myself being drawn into the book until the team started to form up. The Protestant and Wiccan characters are very stereotypical, which is a shame because Fabian does a great job of portraying a racially diverse cast that does not rely on stereotypical traits. The Protestant and Wiccan character aren’t major characters though so their scenes don’t ruin the book. Other than that the only other thing that was a slightly jarring was Sister Ann. At first, she seems like a manic-pixie-dream-girl, without the fan-service. I can’t be too hard on Fabian for that though because Sister Ann is an enjoyable character despite the manic-pixy-ness, and it is difficult to pull off a character of that…nature. I cannot say more than that without spoiling the ending. It’s a nit-picky criticism of the book but if other readers like myself are a bit off-put by it at the start, don’t be. There are reasons for the oddness and they are quite interesting.

What happens when a team of sisters, a runaway priest, a Wiccan and Protestant and a shady businessman find an alien spaceship? Oddly enough a lot of fun happens.

Discovery is a good book for readers in grades middle school and up who love adventure and treasure hunts. I would not recommend this to most non-Catholics however. Fabian is a public Catholic and while the story didn’t feel like it was trying to force a conversion it makes no apologies for its worldview. As a Catholic reader, this angle is refreshing. However, Protestants and Wiccans might not like the depiction they receive under Fabian’s pen. Oddly enough I would recommend this book to some of my atheist and agnostic friends, as long as they are not fazed by the idea of reading fiction written in a Catholic worldview. After all, there are plenty of Atheists and Agnostics who love the Narnia series. If you are looking for a fun journey it’s well worth a read.