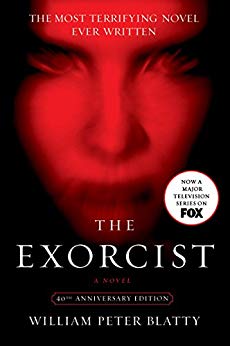 Few books involving the Catholic Church are as notorious as The Exorcist. Even decades after it was first published, this book is still on many secular lists for the scariest book ever written. What many fail to mention is how surprisingly beautiful it is. On the very first page of the book this sentence alone took my breath away as forcefully as the traditionally scary scenes to follow; “…The bones of man. The brittle remnants of cosmic torment that once made him wonder if matter was Lucifer upward-groping back to his God.” If any book can convince me that the horror genre can produce classic works of high literature this would be a prime example. This book opens with great beauty, carries you through some hair-raising scenes and leaves you feeling—of all things—hopeful, comforted and at peace with the world’s dangers and the Catholic faith.

The premise is simple and well known. A sweet young girl starts exhibiting strange psychological symptoms. Her mother and doctors search frantically for a remedy and at last, despite their strident atheism, find themselves at the doors of an Ignatian priest practically begging for an exorcism.

Though he changed many aspects of the story, Blatty actually based his fictional story upon a nonfictional account. Though the particulars of the real-life case have been kept quiet at the request of the victim and his (yes, we do know it involved a young boy not a girl) family. He also changed the location of the story to be at Georgetown University where he first heard of the real-life case while a college student. The head exorcist in the story he based upon Cardinal & Saint, John Henry Newman.

Readers will be happy to know that both the real-life victim and priests involved survived the ordeal and ostensibly led normal lives. The boy in question is rumored to have named his first son Michael, after the archangel whose intercession saved him!

So how scary is it? Fairly scary. I’m not the most well-read horror fan, but there were a few scenes that have stuck in my head. If your kids read this, they will likely have some nightmares. Though, to be honest, that’s not a bad thing. If this book scares them, it will scare them straight. There are some creepy-body contortion scenes, disturbing moments where the possessed child says some sexually explicit things and perhaps the worst scene where the demon forces the girl to masturbate with a crucifix. I can see how some readers might have nightmares, but most of the time it was more sad than disturbing. I was grieved for the worried mother of this child more than I was startled at the mind-games of the demons.

And lest you worry about attracting demonic attention by reading this book I would refer you to Gabriel Amorth’s very NOT-SCARY nonfiction book, An Exorcist Tells His Tale. In it he explicitly says that speaking about demons does not affect a person’s likelihood to be affected by them; much like talking about cancer does not cause tumors. Only by directly engaging with the occult, occult practices and opening oneself up to various spirits does a person increase their chances of affliction. Indeed, according to journalist Patti Maguire Armstrong, exorcists today rarely have issues with scary books or movies involving exorcisms. At worst, the experience will put the fear of God in you. Armstrong has interviewed many exorcists around the country for both secular and Catholic publications and has become a recognized expert among journalists on the topic of exorcism.

I did go to bed a few nights with a rosary in hand and had a faint creepy-crawly feeling when I turned the lights off. At the same time though, that book also made me truly feel the comfort of my faith and prayers. The fear of God is frightening at first, but once you accept it the surprising result is comfort and peace. Perhaps secular readers will feel differently but I am surprised to say that this book left me feeling slightly more at peace about the world and my faith than I was before. I think many Catholics will find this book has a similar effect on their prayer life. And without spoiling the particulars of the ending I will simply say this: Grace always wins.