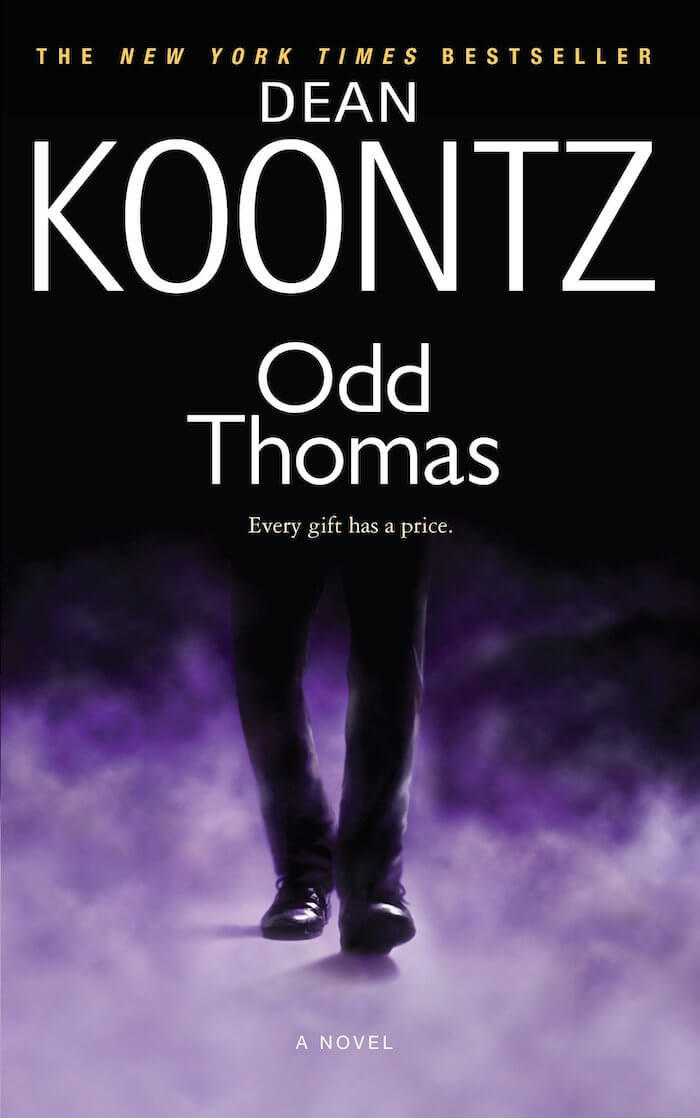 Odd Thomas, (yes his parents named him that) is easily overwhelmed and clearly broken from an abusive mother and distant father. Yet he has carved out for himself a rare serenity. He has a loving girlfriend and a job he enjoys flipping pancakes in a diner. He keeps his life as simple as possible for a boy who sees the dead and demons. He lives so minimalist that Marie Kondo would be appalled at the wardrobe of exclusively white t-shirts and jeans. In a genre where brash manly Bond types are typical it is disarming to meet a humble fry cook haunted by the penitent ghost of Elvis Presley

The dead don’t bother him. Much. Unless they’ve been brutally murdered, in which case they come to him for help. In this world the dead cannot speak, but usually Thomas will make time to talk with them and help them find the courage to move on to wherever they go next.

The Bodachs do bother him though. Bodachs are strange shadow like creatures drawn to tragedy like cockroaches to a landfill. Their nature is a bit of a mystery to him, though he does know that the one other person he ever met with his power was killed by them when he revealed that he could see them. After that experience, he does his best to pretend he doesn’t see them and tip them off to his knowledge. But then one day a man comes into town and he is practically crawling with Bodachs, like they know something terrible is about to happen. If his town is suddenly swarming with Bodachs that can only mean tragedy is about to strike and he thinks that this stranger might be the reason. Tomas doesn’t know what the man is planning or why and his only clue is a ripped page from a calendar for August 15th. Today is August 14th and Thomas has less than 24 hours to figure out what disaster is about to happen and stop it.

The more apparent Catholic elements of the book are Thomas’s faith in God and heaven, a friendly priest and of course the fact that he fights evil. You could probably make the comparison between Bodachs and low-level demons but such comparisons are subtle. Though Thomas knows that the dead do go somewhere he doesn’t really know where. His girlfriend Stormy says that she believes that the afterlife isn’t some perfect paradise but that it is almost like joining a celestial military against evil, for which the troubles of this life are boot camp. It’s an interesting twist on the idea of the communion of saints and the Catholic idea that the dead and those in heaven spend much of their time praying for us. It’s an idea that is only introduced in this first book but I suspect Koontz will explore it more fully in the sequels.

Odd Thomas is an excellent thriller though it has a fairly predictable ending. Even so I could not tear myself from the page. I was most impressed with the main character. Though it might not be immediately apparent to the secular reader, this young man is clearly on a path to sainthood.

Dean Koontz is a strange figure in the publishing world, not in the least because of his Catholicism but his strangely humble and likable demeanor. If you want an author that can cross the boundaries between your Catholic friends and family and other friends and family Koontz has a proven track record of bringing everyone together without sacrificing the truth. I knew Koontz was an author who didn’t back down on his faith but I quickly learned that he doesn’t back down from telling a good story either.

Although I enjoyed this book I get the sense that Koontz wrote it more as an origin story he needed to get out of the way before he could start telling the really good stuff. Now that I’m half way through the series I can assure you that it just gets better and better from here.