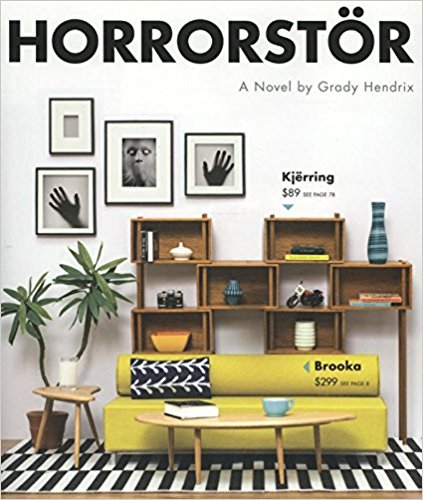 Finally, someone’s done it. Someone’s written a horror novel about a haunted IKEA. And boy is it done well.

Finally! A scary story set in an Ikea!

Now, the store in the story isn’t an actual IKEA, for clear copyright reasons. It’s an Orsk. Wonder why? Just Orsk!

Our story begins with the day to day dreariness at the Orsk store of a young, female, twenty-something college drop-out named Amy. As usual, she is condescended to by Basil, her supervisor is constantly upstaged by the perceived to be younger and prettier Trinity, has to deal with the weirdness of Matt, and only finds solace in the kindly old woman Ruth, until the furniture starts to mysteriously smell bad. So Basil makes Amy and Ruth stay overnight to see who is soiling the couches. They run into Matt and Trinity, who have snuck into a ghost hunt. Then they all run into a homeless man named Carl. And they all hold a séance. And that summons the evil spirit of the Victorian prison/asylum warden the Orsk is built on top of, who threatens the lives and sanity of the group.

Now, why is this a Catholic novel? None of the characters are confirmed in the Catholic Church (or at least aren’t said to be). There are no priests. The only character who uses language similar to a priest is the evil prison warden, a comparison the author makes once and then never comes back to. And the novel has not one direct mention of Christ or Churches.

But we have to remember that this is a novel about a knock-off IKEA store. The novel’s setting is explicitly secular, material, a place meticulously organized around collective self-interest. To get at the heart of what could scare us about the spirit of a place like IKEA – a place I and several of my friends have always been enthralled by- one has to show is devoid of the outer signs of the spiritual.

But I think what Hendrix clearly shows is that in trying to rob a place of its spirituality, one only serves to cause a spiritual corruption. The tortures and horrors the main characters are put through aren’t experienced as horrors when they are fully accomplished. The spirit of the store makes them feel satisfied with isolation, with falling away from having a purpose in life, with utter dependence on the store itself for survival. Yet it’s only because the other characters see the effects of the torture that any of them are saved from it.

But not all are. And some stay trapped. However, the ones who are saved learn that it is ultimately their responsibility to go back and save the others. The characters being in a place where they despise their customers, and coworkers, their neighbors, because the life of the store doesn’t give they what or need. But when they are confronted with the spiritual evil at the heart of the store – the pain forcing one into isolated, immobile, cold beings devoid of personhood- the characters learn to do that which is at the bedrock of Christ’s truth – to love one’s neighbor as one’s self.

Warnings: there’s some scatological stuff and parts where a bunch of dismembered hands touch people, so, triggering.

Grade Level: If you’re old enough to read a big kid novel, then you’re old enough technically to read this book. You’ll get the most out of it though if you read it somewhere between 17 and 35. So I guess Young Adult to Adult technically. I’d say if you’re a very mature 5th or 6th grader you could read this, but keep it away from your 7th and 8th graders because middle school is the worst, but entering high school and beyond it’s probably a good book to read because it can mentally prepare one for the possible spiritual dangers of working for a misguided corporation.

Audience: Adult, or Anybody who’s had to significantly deal with a corporation, or IKEA (so, everybody, basically).