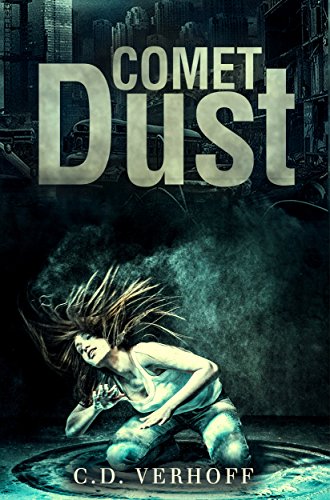 A strange, little-known fact about me is that when I was a young evangelical girl, I read through all sixteen tomes of the Left Behind series. Say what you want about Tim LeHaye and Jerry B. Jenkins, they know how to write a good story. At the end of the first book, I was intrigued and open to the idea of Post-Millennialism. By the end of the series though, it was laughably unbelievable to me. Reading the whole series was probably a better way to de-convince me of Post-Millennialism than anything the most scholarly of apologists could come up with. I think it was somewhere around the time that the stinging bugs with human faces showed up, not to mention the Calvinistic way that, after a certain point in time, humans could not convert or repent even if they wanted to. Still, it wasn’t a bad introduction to the apocalyptic dystopian subgenre.

If somehow I could go back in time and give that little evangelical girl a better book, it would have to be Comet Dust by C.D. Verhoff. Verhoff understands something that many Christian apocalyptic writers fail to realize—that the end of the world is only really scary if you’re going to Hell.

Gina Applegate spends over half of the book as an unrepentant, skeptic who none-the-less knows she is going to hell due to a poop-in-your-pants inducing vision she has at the start of the book. She has the vision at the start of the book but is so angry and hurt that God would send her to hell that she moves from lukewarm fallen Catholic to stubbornly atheist. “The God I know would never send people to hell,” she says. Of course, she does eventually convert, but only at the worst possible time and place that she could have done so. This makes for a great high-stakes, can’t-put-it-down reading experience.

Even though Gina is a skeptic in a Catholic book, she is not stereotypically evil or annoying. In fact, I think many Catholics will find her unnervingly recognizable. She’s smart, responsible, good at her job, loyal to her friends and unfailingly compassionate towards those who suffer, but she also has a bit of a social media addiction, likes sleeping with her boyfriend and has a hard time forgiving God for the death of her sister when she was only twelve years old. Through the prayers of said sister, the influence of her faithful grandmother, and her own unconquerable spirit, Gina finds a way to survive in a dying world.

As a millennial myself, I find it refreshing to see a hero struggling to make a living in a rough economy. It also is nice to have a Grandmother as one of the main characters in the book. It’s not often you see a good intergenerational friendship in fiction like the one between Gina and her grandmother. It is also nice to read a young adult/ new adult book that does not have a love triangle, needless cruel government, or an authority figure that “just doesn’t understand!”.

What is especially impressive is how Verhoff manages to give all the strange apocalyptic happenings plausible scientific explanations, at least up until the climactic ending, where things get delightfully weird. In the Left Behind series, a lot of the supernatural events were not given explanations, and any skeptical characters were basically told to just deal with it. It helps perhaps that Gina herself supplies the explanations that she uses to understand the events and miracles around her.

In the prelude to the book that Verhoff confesses that she used many private revelations of saints and mystics like St. Faustina. She even included the original excerpts of St. Faustina’s diary and a list of sourced Catholic saints and mystics’ private revelations at the back of the book. Though there are a lot of good differences between LeHaye and Verhoff’s stories I was surprised with how many similarities there still are between some of the apocalyptic happenings in Comet Dust and those in the Left Behind series. The similarities and differences between these two fictional worlds might make for a productive and interesting ecumenical discussion between Catholics and non-Catholics.

If you are reading this review and a Protestant, would you like this book? Probably not. The only reason that I can think you would is if you are intrigued enough by what I’ve said already and honestly do want to have a conversation with Catholics comparing our respective end-of-the-world theories. But otherwise, there is a lot that you might not like about this book, references to the dead praying for us, the power of the rosary, and Eucharist (Catholic word for Communion) and Mary herself shows up a lot as a background figure. At the same time, these are all basics of the world building. This isn’t about proving that any of these are real. Also, there aren’t any demonized or belittle Protestant characters. In fact, one of the minor heroes of the story is a female Protestant minister.

As the book is marketed as a Christian apocalypse novel and opens with a character being sent to hell I’m not sure if secular readers would want to read the book or not, but I think that once they did, they wouldn’t find the story corny or disrespectful. They might even like that it’s Gina’s hypocritical way of professing to be a Christian without living it that is criticized more than her cynicism. Whether you’re secular or religious, everybody hates hypocrisy. In fact, Gina’s atheist roommate has the same vision as Gina, but she is actually sent to heaven because her love for truth is so pure, and God, after all, is the truth. That said this book does end with Gina literally taking refuge from demons inside a church. Things don’t get real crazy until the end, but when they do, it’s like something out of Pan’s Labyrinth or H.P. Lovecraft’s Call of, Chthulu.

I also feel beholden to warn readers that there is some pretty scary violent and sexual scenes and subject matter in this book. So while I joke about wishing that I had read this book as a kid the real kid me might not have been able to finish reading it without some serious nightmares. Nothing was gratuitous for gratuity’s sake but take this into account before you put this in a school library or anything. Adult me, however, was about as disturbed as when I watch the daily news (mike drop).

You know, for all that I genuinely like this book I do feel as though I have to put a lot of warning labels on it!

If you are looking for the next apocalyptic dystopia that avoids all the tropes that have become too tired but still leave you biting your nails throughout, I heartily recommend Comet Dust. Also, if anyone has a time machine let me know, and I will mail you a copy for delivery.