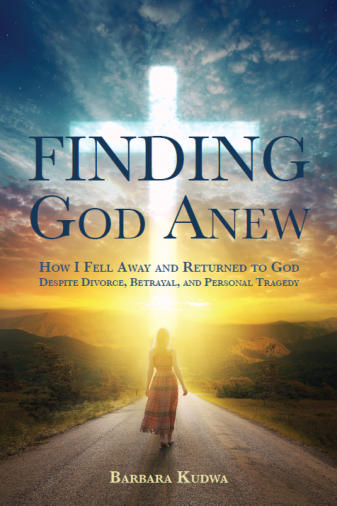 Barbara Kudwa discovers the need for “truth, love, and hope” in her memoir Finding God Anew, but she recognizes these gifts offered by God only after a myriad of heartbreaking events – almost unbelievable – take place in her life. She is unsparingly honest in revealing what she calls her shame and guilt from poor choices, her grief at the tragedies that occurred without warning, and her inability to forgive those who hurt her.

It is a book of healing for anyone who has heard and questioned the comment, “God never gives you more than you can handle.” Despite all that happens to her, she doesn’t come across as angry or self-pitying. Instead she acknowledges her own carelessness in her commitment to the Catholic religion in which she was born and raised, and with each sorrow, she renews her commitment to the church.

The first few chapters document her life as a child through her teens and seem unremarkable in that she comes from a large, Catholic family, with loving parents. She attended Catholic school as a child, and she experienced the usual adolescent angst and teenage rebellion. However I see the point of this beginning as it develops the close, encouraging relationship she has with her parents and siblings.

Their support is so important to her as she struggles with the guilt of her first marriage that ends in divorce, the consequences of a serious boating accident while on honeymoon for a second marriage, and the sadness of a miscarriage when pregnant for her second child. The relationship that she admittedly neglects is her relationship with God. Though she recognizes the need to reaffirm her faith and strengthen her prayer life, the commitment to give her life to God is the continuing challenge in her story.

As her story continues, there is a second divorce, a third marriage, a suicide and a murder of someone close to her.

I felt such compassion for Kudwa, yet am so amazed at her courage and strength to move on and how God stayed with her through all the sorrow and pain. The book isn’t called a devotional; yet, the prayers at the beginning and end of each chapter make for great journal meditations especially for those of us who can relate to some of the tribulations in her story. She is honest about her journey to find herself and finally, to accept the love and forgiveness God offers her.

Though she writes about her life in the Catholic faith, the main goal for her is to “help others in their brokenness.” Whatever a person’s religion or faith or belief, there is something here to reach anyone struggling through a hard time.