In the Footsteps of St. Therese: How to Be Single but Not Alone by Teresita Ogg 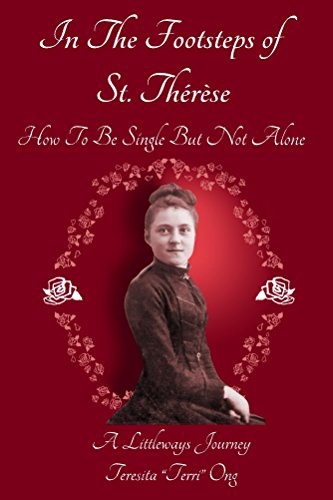 There’s a joke amongst Catholics that the saints choose them instead of the other way around. In the case of Teresita “Terri” Ong, Saint Therese of Lisieux has been a spiritual big sister her entire life.

Terri was born in Quezcon City, Philippines, on September 30th, the day that Saint Therese passed away. Her mother was greatly devoted to Saint Therese. Like Saint Therese, Terri was born into a big family with two boys and four girls, herself included. Like many Filipinos, Terri and her siblings went to Catholic school from childhood to college. Eventually, Terri got a job working in the travel industry, organizing pilgrimage trips and working with people from all walks of life.

Terri also points out this major oversight: The Catholic Church doesn’t really have any programs or ministries reserved for people who choose to be single. Terri emphasizes having a relationship with Jesus and creating a community.

As Terri hits her 40s and 50s, she becomes more persistent in looking for someone to marry., Around the same time, she dealt with changing jobs due to the recession. Terri lived so long in the “hustle culture” of her travel job that it basically took a recession for her to finally slow down. It wasn’t until she worked in wedding coordinating that she finally realized the blessings and benefits of life as a single woman. At the same time, like Saint Therese, she decided that Jesus was ultimately the bridegroom she was searching for all along. I recommend this book for Catholics who are very familiar with discerning vocations as well as those who are familiar with Saint Therese. Terri says that this book is primarily for singles who have never married and for those who feel alone in the world. While being single isn’t technically an actual vocation, it could be something that someone could be personally feel called to.

As an EMT Rodgers has seen God work in ways that defy medical analysis.

If you’re a care-giver for a chronically sick family member or friend, this book is for you and your healing.

Me, Ruby & God; A Journal of Spiritual Growth by Linda Crowley

An Exorcist Tells His Story by Fr. Gabriele Amorth

Fr. Gabriele Amorth dispels the fear of demons by showing us, through stories of his very usual day-job as an exorcist– that God wins every time.

An invaluable handbook for pro-life religious non-profits that want to protect life, liberty, and the pursuit of happiness—without risking their tax-exempt status.

“I see a small-time scholar and a semi-autistic loner, a flawed man who has persistently sought the Holy. The Quiet One.”

When Headlines Hurt: Do We Have a Prayer? by Bill Schmitt

The Pope’s Words of Hope for Journalism

A guide to self-aware parenting for those poorly parented

After multiple divorces, a suicide, and a murder, Barbara Kudwa shares how she found peace through her faith in God.

Fatherly protection of St. Joseph, first with the Holy Family and then in the Universal Church, is needed now more then ever to protect and lead us.

Ascend to Your Father by John Hammes ph.d

This book brings us to a unity with the Triune God who loves us so much that he sent his Son to redeem the world and sanctify us through the Holy Spirit.