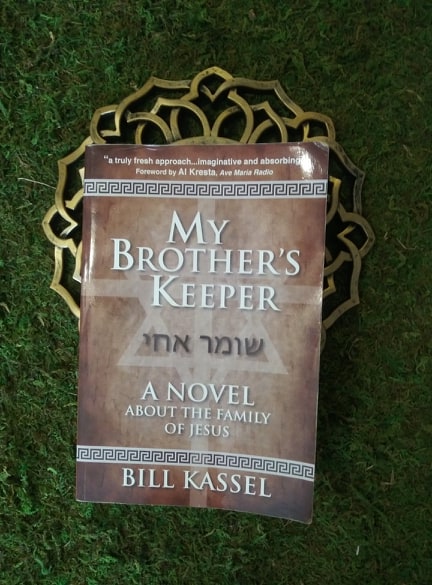 What if you were Jesus’ protective older brother? Could you navigate the courts of Rome & Jerusalem to save him? Historical fiction novels covering the ministry of Christ are a dime a dozen among Christian fiction, but Kassel throws a fresh new spin on the genre by telling his story from the perspective of James the Just, Bishop of Jerusalem, student of the famed rabbi Gamaliel and protective elder brother of Jesus of Nazareth.

Buy the Paperback for $20

“But,” you might say, “Jesus didn’t have a brother! His mother was a perpetual virgin!” Don’t you worry, there’s no heresy here. There are actually two oral traditions about what the Bible means by referring to James as Christ’s brother. One tradition builds upon the fact that even today, the Arabic, Aramaic, and Hebrew languages have one word for brother and cousin, and that James is Jesus’ cousin. The other tradition is that St. Joseph was a widower when he married Mary, and James was a son by his first wife. Kassel borrows from the latter tradition. He even has St. Joseph on his deathbed, charge his son James with the protection of his younger brother Jesus, whose strange birth portends the tumultuous life of a prophet.

The book begins before Mary is even on the scene, and James is his father’s favorite youngest son who plays in the family compound with the children of his older siblings, studies with the village rabbi and dreams of living in Jerusalem as a scholar of the law. Kassel so draws the reader into the daily and political life of the Israelites that if it weren’t for Jesus being in it, I’d swear this was a Jewish historical fiction novel, even more so because Jesus’ nature is not revealed to his human family until the very end of the book.

When Mary does show on the scene and some more miraculous events start happening, Kassel portrays the family of St. Joseph reacting with a natural dubiousness, fear and doubt. Though many in the extended family don’t know what to make of this strange, despoiled, temple virgin and her claims, they gradually welcome her in out of respect for Joseph and growing affection for Mary. It isn’t until Roman soldiers break into their home searching for the infant Jesus that James and his family begin to think that there is something to this strange woman’s claim. Even then, they only surmise that perhaps this child will be a prophet like those in ages past. The idea that Jesus could be the Messiah hangs in the air, but each finds the idea too unlikely to entertain for long.

Amidst all of this, though, James is growing up. His father misses his Bat Mizvah because he is away in hiding in Egypt with Mary and Jesus. Shortly after his father does return, James is accepted into the school of Hellel, the most famed rabbi in Israel. His father travels with him to help him get settled in his new home in Jerusalem. They find him a room to let with a tin merchant with political aspirations named Joseph of Arimathea. In between his studies at the temple, James acts as message courier between his boarder and his boarder’s political mentor, Zachariah, father of infant John the Baptist.

Because James lives so far from his family and has so little interaction with them, this book reads more like an ancient political thriller than a gospel revival. It helped me to understand many elements of the gospel that had been vague to me, such as why the temple priests were so threatened by a country preacher, what Mary’s early childhood was like and how it affected her, or how the son of the esteemed priest Zachariah could end up wandering the wilderness. James regards his younger brother with that same mix of confusion, criticism and dogged acceptance that many older siblings have in regard to their younger. Given the strange circumstances of his birth James has long accepted that he will never understand Jesus and just does his best to provide him with support and protection.

However, I do have two issues with this book, though they aren’t deal breakers. The first is that the romantic subplot between James and one of the women who follow Jesus was never resolved. The second is that the depiction of the crucifixion lacked the sort of emotional punch I have come to expect in this genre. If you are squeamish or tired of sad scenes however, you might think that is a good thing.

Overall though, this is a refreshing take on this classic story. Christians, Atheists and Jews alike will find it informative, well grounded, and engaging. If all of Kassel’s books are as well researched and unique, I hope to see more of them.