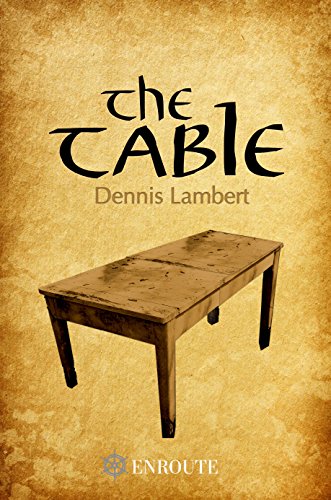 A miraculous table built over 2000 years ago by the grandfather of Jesus Christ and marked beneath with the words “Love has come” survives the darkest moment in salvation history to bring peace over 2000 years later to a modern day musician just as he loses the love of his life in a terrible accident.

Author Dennis Lambert links two different eras in an incredible journey through Church history to the present day. Though the trail of the table isn’t fully revealed until the end of the book, two stories weave together thematically to show how humanity survives through its brokenness with the assistance of faith and love.

The saga begins with Jacob, the father of Joseph, at the bedside of his dying wife, Rebecca. She elicits a promise from her husband with her last words, revealed to her by an angel, “Believe what Joseph tells you.”  Years later, a heart to heart talk between Joseph and Jacob introduces the words of another angel regarding the pregnancy of Joseph’s wife and the incarnate birth of their son. Though elated to discover his grandson is the Messiah, Jacob is heartbroken to learn that they must flee to Egypt to save the child.

Between each of these first chapters, Lambert time-travels to the 21st century to the life of Michael Fortunato and his wife, Debbie who together realize the dream of their married life to attain success in the music industry. Just as they say yes to touring as the opening act for a famous rock and roll band, Debbie loses her life in a car accident throwing Michael into a deep, downward spin.

The writing of the book is top notch. As a deacon, Lambert knows his church history. I marveled at the characters he sprinkles throughout his narrative whose names resonate with similar characters in the Old and New Testament. The original Jacob, son of Isaac and Rebecca, married Rachel, who bore a son named Joseph. Lambert uses the name Rebecca as the mother of Joseph, father of Jesus though we don’t know her actual name. Other familiar names are Ephraim, Simeon, and Laban.

Most prominent of the Biblical characters other than the Holy Family is Cornelius. He is a Centurion who witnesses the changing of water into wine by Jesus at the wedding of a wealthy merchant’s daughter and becomes fascinated by the young Messiah. When the merchant is arrested by Roman soldiers and all his belongings are confiscated, Cornelius decides he must rescue the Table where the miracle took place. He finds it discarded in a courtyard and witnesses the horrible scourging of the man he so admires. The Table that holds the whips used by the Roman soldiers is splattered with the blood of Jesus. Cornelius becomes the Table Bearer when Jesus raises his head, looks at the Centurion and whispers the words, “Love has come.”

The chapters intertwine back and forth, and in the current time, Michael must find a reason to continue living without his wife. Friends attempt to entice him back to his love of music, but it isn’t until he meets an Autistic young man named Anthony that he takes a step out of his depression. Anthony carries a family secret in his backpack that no one is allowed to see, and since the death of his only living relative, he needs someone he can trust to care for him.

I think I learned a little about Lambert as I read this novel. Obviously, he loves music, and he and his wife, also named Debbie, perform together in bands. If I met him, my first question would be, “Have you ever performed with a famous Rock and Roll band?”

This book is undoubtedly great for young adults, but as an older “folk,” I also enjoyed the music scene theme. The worldview is definitely Catholic, but any person who appreciates a good, clean read would find it here.

1st place for Best Book by a Small Publisher

3rd place in the category of Catholic Novels