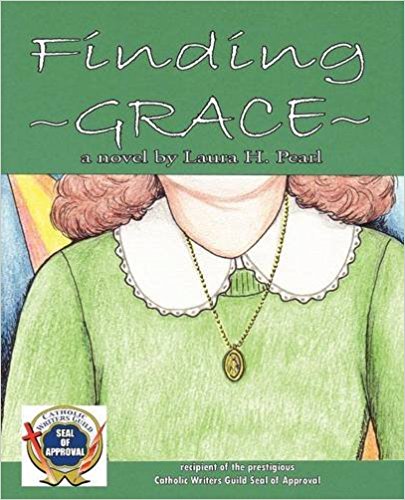 The theme of Finding Grace, a young adult novel by Laura H. Pearl, is to understand the life of a teenage Catholic girl surviving high school amid the rapidly changing culture and tumultuous conflicts of the 70’s. There is so much to talk about because there is so much to Grace’s story as she strives to live her faith during a time when our society questioned deep moral issues.

Subscribe to Our Weekly Email to Get this book half-off!

The first part of the novel covers 1972, Grace’s freshman year. From the beginning, we learn that Grace Kelly who comes from a traditional Irish family dislikes her name. She finds it humiliating that she is so unlike her namesake, the beautiful actress/princess from the movies. As she discusses the problem with her father, the first issue of the decade is introduced as he demonstrates an aversion to “women’s lib.” His hopes for his daughter’s future include a good marriage or life as a nun.

This topic of discussion isn’t the first conversation of its type, but her father indicates that he believes his daughter is a saint or will be someday, and Grace makes an important decision affecting the rest of her life. Her mission becomes learning all she can about the saints and striving to achieve that goal.

I think the name of the novel has a three-fold meaning. First, of course, involves the coming of age of its protagonist as she matures becoming comfortable with who she is and what she believes. Secondly, it indicates the gifts of the Holy Spirit in providing knowledge, strength, and understanding when faced with moral decisions. The third meaning has to do with grace from God freely given as love and forgiveness.

As the novel moves through the years until Grace graduates in 1976 and into 1980 when she finishes college, she faces the same challenges as most teens her age: lack of self-esteem, attracting boys, falling in love, and interacting with her peers. Challenges related to the decade include underage drinking, chastity versus teenage sexual relationships, birth control in the form of the pill, and the legalization of abortion. Pearl even includes a story about a Jewish neighbor who survived the Holocaust and a situation describing the fear of parents losing sons to the Viet Nam War. Having grown up through the same time period as Grace, it is interesting to me to remember how greatly society changed during the ‘70’s and the impact legal decisions had on the Church and her families.

Grace perseveres in her determination to become a saint, and the novel briefly teaches about many saints beginning with St. Augustine and St. Therese of Lisieux, including Blessed Pier Giorgio Frassati (so good looking to Grace), St. Maximilian Kolbe, and naturally the Blessed Virgin Mary. Young adults reading Finding Grace cannot help but learn lessons about the Catholic religion.

Those lessons learned through Finding Grace compose its greatest purpose. Besides the history of the decade and the manner in which the culture was changed, a young person learns from Grace how to overcome poor self-image, how to identify people who support you, and how to be loyal and forgiving when friendships break down or people you love make poor choices.

The weaknesses in the novel are its length and its numerous shifts in point of view. Scenes are described in too much detail leaving little to the imagination for the reader. I sometimes found myself wanting to skip sections unnecessary to the story. Also, the author writes in third person limited point of view mostly through Grace, but the narration unexpectedly and frequently shifts from Grace to the thoughts of other characters that interrupt the novel’s flow.

Nevertheless, I recommend this novel to teens and young adults. They would strongly identify with Grace and her friends, and I see nothing that could be offensive or beyond what an early teenager could understand. The writing style reminds me of St. Therese of Lisieux in her autobiography The Story of a Soul.

Finding Grace is not just a book for Catholics. It’s a good read for protestant friends who would not find it preachy but benefit from learning about Catholic culture. To be honest, I think this is a book for any young person because the situations are so common to today despite the 1970’s setting.

Subscribe to Our Weekly Email Find Out When This Book Is half-off!