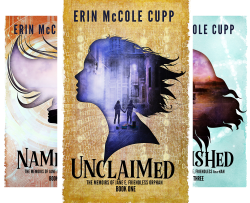 Unclaimed, Nameless and Vanished are three novellas that retell the classic novel Jane Eyre by Charlotte Bronte in a near future America corrupted by biotech, cloning and other crimes against the theology of the body.

Jane Eyre is one of those early feminist novels that have nearly as large a following as Jane Austin’s Pride and Prejudice and yet, unlike that book, authors have shied away from adapting Jane Eyre to a modern setting because much the main conflict of the story hinges upon the heroine’s choice to deny herself the man she loves because she considers it to be adultery. To a modern mind, such a decision driven by overt Christian principles is absurd. The idea that Jane’s lover cannot just divorce his wife and marry Jane is confusing even to many Protestant readers who ostensibly share the character’s Anglican faith. Despite this, I’ve known even secular readers to be charmed by Jane Eyre’s integrity and the gentle reflective tone of Bronte’s novel that keeps this blatantly Christian story from sounding preachy.

I have often reflected that if Jane Eyre were to be set in modern times she would have to be Catholic instead of Anglican for the story to follow the same structure as it does in the original, but what author could have the talent for capturing Bronte’s beautiful prose?

Not only does her prose capture that confessional humble tone of the original, but her plot and setting force readers to consider it’s themes in a whole new light. Cupp sets her modern Jane in a near future setting, where cloning, gene splicing, and nanotech run rampant. Jane herself is a victim of a society that has forgotten the lessons of Pope X’s Humanae Vitae. Like the original Jane Eyre, Jane E is an orphan but not because her parents died. She is an unclaimed embryo, left forgotten in a fertility bank until she is brought to term in an artificial womb. She is only born because the owner of the fertility bank had an end of life conversion and left a portion of his wealth to the five remaining unclaimed embryos in his lab. She is named Jane because all the unclaimed girls are named Jane, and all the unclaimed boys are named John. Her last name is the letter “E” because she was the fifth embryo of the set.

In the original story, her selfish aunt sends her away to live and work in a poor boarding school. In the adaptation, Unclaimed, Jane E. is sold to work in a sweatshop in India called the Naomi Institute. There she is taught to weave codes into the fabric. In a world where the government can hack into even the most private of worlds, illegal organizations and underground religions like Christianity resort to communicating by old-fashioned means. Jane E. learns about faith and God by weaving illegal prayers and messages into cloth and then ferrying them with her across borders disguised as clothing, blankets, and scarves. Her real conversion, like in the original comes through the example of a young Irish girl. In the original Jane Eyre, Helen Burns’ Irish Catholicism is only hinted at. In Unclaimed Cupp makes no bones about it. All of this serves to make the childhood of Jane E possibly even more interesting than it was in the original.

If however, you are one of those Jane Eyre fans who found the childhood portion of the story boring you can skip it and pick up the second novella, Nameless, instead and read from there.

And here we come to the two main questions in every Jane Eyre fan’s mind. Does Cupp water down the moral choice that Jane is forced to make? And how does she adapt the controversial character of Rochester?

To the first question: no. If anything Cupp makes Jane’s integrity even more dramatic. In the original both the law and culture forbade Jane Eyre to stay and become the “other woman” but in Jane E’s world, both the law and culture encourage it. And yet despite this Jane E still chooses to leave. I am happy to say that the moment is as heartrending and moving as it was in the original.

As for Rochester, I am very satisfied with the way that Cupp adapted him. Many readers have complained that Rochester is vile for hiding the secret from Jane and for a few other choices he makes throughout the story. In Cupp’s story, Rochester (renamed Thorne) is less terse than he was in the original and his personality and reasoning are more thoroughly explained, though no excuses are made for his attempts to control Jane. Cupp also goes to show how in the early part of the romance Jane herself is attempting to achieve a dysfunctional sort of mastery over Rochester as well. Rochester’s conversion is also more thoroughly explored and Cupp masterfully demonstrates how in the first part of the story Jane and Rochester’s love is more selfish and driven by their own insecurities than true love. Even a secular reader will see how if Jane had chosen to become the other woman, the couple’s relationship would have been doomed anyway. Both Jane and Rochester must undergo conversion and repentance before they can achieve true and respectful love that wills the good of the other.

After fleeing from Rochester Jane meets another love interest, St. John in the third volume, Vanished. Like her adaptation of Rochester, Cupp tweaks St. John’s character in ways that enhance the story without destroying the core themes of the character.

In the original, this competing admirer of Jane’s is her cousin. While that was perfectly acceptable in Bronte’s age it’s a bit of a turn-off for the modern reader, and yet the familial connection is an integral part of what draws orphaned Jane to one of the only family members she knows. Cupp preserves that conflict but deftly skirts the issue by having her St. John (renamed Jordan Devine) be the son of the woman who donated the egg used to create Jane E. Though they share a connection, they share no genetic parentage. Cupp also explains the original St. John’s strange attitude towards sex by having her Jordan be a gay man who asks Jane to marry him more to prove to himself and others that he has mastered his desires than out of real affection for Jane. Whereas with Rochester, Jane had to choose to accept or reject a life of passion with no purpose, with St. John, Jane must choose to accept or reject a life of purpose with no passion.

Cupp’s 3-part adaption of Jane Eyre nearly as powerful as Bronte’s original. It still remains true to Christian and Catholic morals regarding sex and marriage and it remains a wonderful book that both religious and secular readers can enjoy and respect. Fans of the original Jane Eyre will love Jane E. and new readers who might find the original classic literature intimidating will enjoy this adaptation as well, though they will likely miss a lot of the references. If buying 3 novella eBooks does not suit you then you can buy the whole book in physical form under the title, Jane E Friendless Orphan, though the cover of that one isn’t as beautiful as the covers for the eBooks. Besides, fans of the original Jane Eyre would do well to remember that it was originally published in three volumes like this.