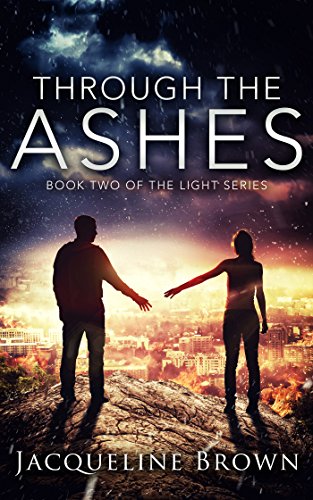 Through the Ashes picks up a little after Jacqueline Brown’s first book, The Light. The cities in the Washington D.C. area have devolved into a war zone, with abandoned buildings, destroyed properties, and military guards everywhere. Bria continues to live in the countryside with a family who was friends with her parents before the death of her mother. She wrestles with feelings of attraction for Jonah, one of her friends from the countryside was discerning priesthood and she doesn’t think much of herself due to an abusive relationship she had in the past.

Life has been moving on for everyone at the farm. However, Bria’s friend, Sara, still worries about her family, who live in the Washington D.C. area. She hasn’t seen them since the EMP from the first book rendered all technology obsolete. In spite of everyone warning against the idea, Bria, Jonah, and some of the other young adults on the farm head into the D.C. metro area to find Sara’s parents.

When Bria and the others arrive in the Washington, D.C. area, they cross paths with Trent, Bria’s ex-boyfriend. Trent seems to be a good person who happens to be living the high life in a high-end apartment with running water, shampoo, and other formerly everyday items that are now regarded as luxuries in this story. Bria is tempted to stay with Trent until his true “survival of the fittest” colors are shown.

See Reviews for the rest of The Light Series Here

One problem I have with this novel is that it doesn’t take long for Trent to go from seemingly normal soldier to total monster. I would have preferred if the mask came off more slowly, with Trent trying to tempt Bria slowly, instead of outright forcing Bria to become his fiancé and threatening the lives of her friends.

Still, this novel is a great follow up to The Light, as Bria returns to the world she used to know, a world that was only implied in the first book. It’s clear that Bria’s time in the countryside has changed her, as she has more compassion for the people that Trent regards as lesser beings. How the less fortunate are treated is one of the themes of this book, along with dealing with temptation and the struggle between doing what is easy versus doing what is right.

I recommend this book to young adults who are fans of dystopian fiction, such as The 100 or even Hulu’s Runaways or The Gifted. There won’t be any teenagers with superpowers, but this story of survival breaks the mold because the apocalypse was one that human beings brought on themselves.T

Buy the Audiobook for $17.46 or Free with an Audible Subscription