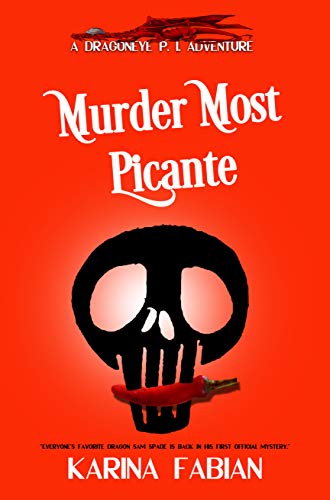 Vern is not having a good time of it. As a dragon, an eighth day creation made in the imagination of God, he is used to sleeping on beds of treasure, dolling out advice to kings, queens, princes and princesses. He is NOT accustomed to sleeping in a parish garage being accused of eating the neighbor’s cat. He is comfortable with flattery and the grandiose respect due a member of his species. He is NOT understanding of I.C.E. agents alternatingly threatening to deport him or lock him up in the town zoo, that is, when they deign to speak to him as an intelligent being at all. Yet God must have a reason for calling him to emigrate from the magical world of Fairie to the mundane world.

Subscribe to Get Weekly Catholic Books 50% off to FREE

Tenuous as his position is, Vern finds himself thrust among a community of similar outcasts, migrant laborers, and yes, a LARPing troupe of geeks. When one of these young women is accused of murdering her abusive boyfriend, Vern finds himself thrust into a chain of events that put him in the path of dangerous men. Ever since he lost the battle with that sassy Saint George, Vern just hasn’t been his old dragon self.

Author Karina Fabian writes in multiple genres, but it is clear that comedy writing is her first love. I haven’t read such a fun book since Terry Pratchett died. Most of the humor is situational though, so it’s hard to explain just how funny this book is without giving away the plot, though one of my favorite moments was when Vern described a new character he meets as an “appetizer-sized woman.” Reading this book was the perfect antidote to the stress of 2020. If it has a flaw, it is that the mystery itself is a little obvious. I was more engaged by finding out what new hijinks Vern was going to find himself caught up in along the way. All of the characters were hilarious and multi-dimensional without being reduced to joke machines. I enjoyed the good-natured and over-the-top-hippie “Natura” and the odd couple she made with the reserved and awkward Sheriff Bert especially.

Subscribe to Get Weekly Catholic Books 50% off to FREE

The comedy makes this book appropriate for readers as young as the 5th grade, but enjoyable for any age above that. Though the Catholic influence on this book is overt I don’t think a secular reader would be bothered by it or find it makes the reading experience any less enjoyable. The Catholic elements are baked into the structure of the fantasy world without turning the story into a preachy melodrama. It’s as if all those ancient stories about saints battling dragons, or meeting talking wolves happened literally and were built into a complex classic European fantasy style world. If you are one of those who is skeptical that anything with dragons and magic can be Christian, give Vern a shot. I think you will be pleasantly surprised.