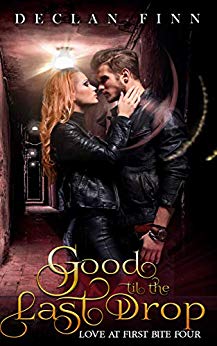 In Good to the Last Drop, Declan Finn brings the story of Love at First Bite to its epic, if not unexpected, conclusion. In the previous book, vampire hunter extraordinaire Marco Catalano and his now girlfriend, the Catholic vampire Amanda Colt, confirmed the existence of a secret council that stood atop the vampire world. Now, the council’s last surviving member is coming after them, and he is not happy.

Things really get kicked off with a werewolf attack on Marco, an attack that leaves him infected with the werewolf virus. At first, you may be tempted to think that this isn’t too big of a deal. After all, Marco with super-strength and enhanced speed should only make him a better hunter. While that is true, Father Rodgers (local head of the Vatican’s own vampire hunting team) points out that this is far from a good thing. The werewolf virus doesn’t just grant extra strength, speed, and senses, it also increases the host’s personality traits. Given Marco’s own intense and often violent personality, one can see how this might be a problem. Marco possibly losing control of his darker aspects is enough of a problem but the situation is far worse. As a newly turned werewolf, Marco is susceptible to control by other werewolves. Werewolves that will probably not be on his side.

Soon it is revealed that the werewolf that attacked Marco was sent by Misha, the final member of the council and by far, the most dangerous. In addition to wanting to forward the vampire apocalypse, Misha has a personal vendetta, he is the brother of Mikhail, the vampire Marco defeated at the end of the first book. He is also the vampire that turned Amanda into one of the undead.

While he may be the last surviving member of the council, Misha isn’t exactly alone. Marco and the others begin to wonder about this after Misha leads an attack on Marco’s home in broad daylight. Not only does Misha seem immune to daylight, he shrugs off hundreds of rounds from the Vatican Ninjas, seeming to only respond to wooden bullets and holy water. I’ve no desire to give anything away so I will only say here that the vampire is able to do this because of a very close partner, an enemy Marco has already met and defeated once.

While trying to solve the mystery of who Misha is and why he is so powerful, Marco and Amanda try to come up with a way to keep Marco’s new werewolf side under control. As it turns out, Amanda’s vampire virus acts as a bit of an antibody, allowing Marco to keep his deeper passions in check. This is especially important, as given the intensity of their personalities, the recently acknowledged romance between Marco and Amanda gets pretty heated and racy at times. While things on the romantic angle stay PG-13 (passions aside, they are good Catholics after all), the amount of blood necessary to keep Marco in check definitely would push a movie based on the book into R territory.

Things get worse when Misha’s forces manage to capture Marco in an attack that results in the death of more than one supporting character. With Marco now in his grasp, Misha reveals that he plans to use Marco to destroy his friends, beginning with Amanda. Of course, that doesn’t exactly go as planned as Marco’s natural will and spiritual strength prove stronger than the werewolf virus. In fact, Marco expressly identifies his Catholicism with helping him overcome the mind control that normally goes with the virus.

The story comes to its conclusion in the same cemetery where the first book ended with a massive battle between Misha’s army of vampires and the Vatican Ninja’s along with the rest of Marco’s allies. It comes down to a one-on-one battle between a fully revealed Misha and Amanda who at last is manifesting her true potential.

In the end, many questions are left as to what was really going on and why, especially given the involvement of Merle’s evil half-brother, Dalf. His true motivations in helping them defeat the council are far from clear, though I have my suspicions. Finally, I don’t believe that Finn is done with these characters. After all, there are other vampires out there, not to mention werewolves, shapeshifters and who knows what else? Whatever the author’s future plans, I look forward to them and seeing my favorite Catholic vampire hunters at work again.