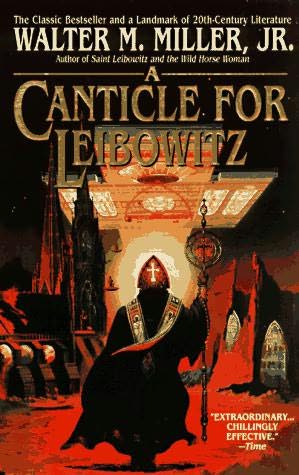 Walter Miller’s novel “A Canticle for Leibowitz” is much more than a post-apocalyptic science fiction story. Millers plot is not driven by a single human protagonist nor by the conflict of man striving against the harsh elements, and neither is it about the historical and political happenings that occur throughout the novels five-thousand-year timeline. Instead, a single relic, a blueprint of an electrical circuit, drives the entire plot. While it acts as a catalyst for the advancement of civilization the relic also allows for civilization’s self-destruction.

Written from the viewpoint of a community of Catholic monks in an ‘ancient’ monastery, Miller has the natural advantage of presenting the ever-constant qualities, values, and culture of the Catholic Church. As the reader continues through the three-part novel, Miller casually informs him of the political, historical, and civil state of humanity as it evolves throughout the future centuries. I was surprised and tickled that Miller gives his audience a story of humanity incredibly familiar to the Traditional Western history they already know, and presents a future eerily akin our present reality.

The book begins at an old monastery in the 24th century, hundreds of years after the Fire Deluge of the Cold War turned hot, in an era where human knowledge and technology are still despised and blamed for the destruction of civilization. The action begins when Brother Francis, a novice of the Albertian order created by the Blessed Leibowitz, mysteriously discovers a pre-Deluge relic, an image drawn by the Blessed Leibowitz himself. Br. Francis takes great delight this seemingly insignificant document full of squiggles and lines and he spends his entire life devoted to its successful preservation. But the mysterious relic discovered and preserved by Br. Francis, disrupt the peaceful community and brings reoccurring trouble to the monastery.

This mysterious blueprint of an electrical circuit, used to reinvent the lightbulb, indirectly casts a light upon man’s integrity, creating a shadow desiring to darken man’s rational capacities. The power available in the science re-discovered brings fear to the monks who once preserved the technology for the advancement of man. While the world is in a renaissance, with a more stable political structure ripe to receive the treasures of the past, the monks still resist sharing their wealth, cautious of casting their treasured pearls of science before the secular swine. The monk’s guardedness makes it appear that they want to deter the advancement of Civilization, but the monks seek to preserve the sacred and fear that the secular scientists, devoid of the belief in God, will not handle the power contained in scientific knowledge and information justly.

But despite all good intentions, pride takes a hold of the monks when they find that the secularist scientists have had access to many of the same ideas they had preserved for ages, through natural discoveries. The monks proud of their work of preservation now question their purpose. The secular scientist who comes to study at the monastery, even faults the monks for hiding such treasure and points out the monk’s pride and fear witnessed by their desire to prevent worldly access to all the treasures of knowledge they hold. The visiting scientist though is naturally prideful of his self-discovered knowledge. Yet while he argues for the freedom of the knowledge and admonishes the monks, the secular scientist himself primarily seeks worldly glory rather than scientific recognition to regain his political position in his hunger for his father’s acceptance. If the reader fails to acknowledge the role of the unchanging Catholic Church presented along with his four or five-thousand-year timeline, every life and every sacrifice, would indeed be fruitless and human knowledge understood only as a necessary evil for civilization to rise before its fall, rather than a blueprint of man created in the Divine Image. The presence of the Church and the community of the monks are the only subjects in Miller’s story that are consistently ever present.

Masterfully, Miller kindly untangles the fine line of hope and despair, of good and evil, of what has meaning or is meaningless. Each of his imperfect characters exposes the reality of man when faced with a conflict that allows the reader to cheer on the protagonist or antagonist into making certain choices. Perhaps in response to the current political turmoil and the darkness of his time, Miller, with his flowing poetic prose and entertaining dialogue, crafts charming characters fighting to find the significance of man’s life on earth. “A Canticle for Leibowitz” opens one’s eyes to the hard choices man faces and introduces a world to the reader where the deeper reality of God and the Church makes a difference in each character’s life. I believe anyone doubting the significance of the Catholic faith and the meaning of their life should read this book.