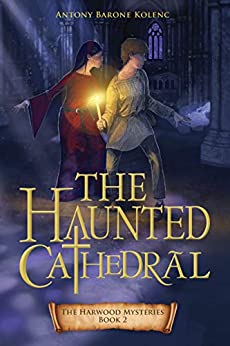 Pain and a desire for justice can be a powerful thing.  Xan (short for Alexander) is a twelve-year-old boy in 12th century England who has suffered greatly in his short time on earth. A group of bandits invaded his village and killed his parents. As an orphan he was taken in by the monks of Harwood Abbey, but after living there for a year, Xan discovers that he is not a free boy, but a serf. His only living relative, Uncle William in Lincoln, may or may not want to help him. For one so young, this is a lot to take in. Perhaps Xan’s most difficult hurdle is the seemingly kind treatment the monks have shown the bandit that killed his parents, Carlo, and their request that he forgive the man that caused him so much pain.

“Forgive us our trespasses as we forgive those who trespass against us.” Brother Andrew, Xan’s teacher, reminds him that we pray those words daily. Refusing to forgive others imprisons us and hardens our hearts. The bandit, Carlo, is sent to Lincoln for judgement of his crimes. Lincoln is a large city, complete with a castle and a cathedral. Carlo is escorted by two guards, Brother Andrew and Xan. On the cart ride from Harwood Abbey to the city of Lincoln, Xan reflects on his pain. Just before reaching Lincoln their wagon is attacked by a bandit. Xan suspects Rummy, a bandit seeking Carlo’s treasure, is responsible. The attack leaves one guard dead and Brother Andrew wounded. Xan must decide if he can trust Carlo with the lives of others.

Xan explores Lincoln with a couple of neighborhood children while waiting for a meeting with Uncle William to decide his future.  He is most fascinated by the cathedral and the ghost story behind it. Attempting to solve the mysterious ghost story, Xan discovers a clue in the form of a gift from Carlo. Throughout the novel it is clear that Xan despises Carlo. Understanding how deeply he hurt Xan, Carlo offers him a gift. Xan accepts it, reluctantly. Could this unwelcome gift change the course of Xan’s life and open the door to forgiveness?

The Haunted Cathedral is the second book in a series. Although I haven’t read the first book, this novel stands on its own as an excellent read. For the history student in all of us, this book includes a map of Xan’s world, a guide to reading historical fiction, a glossary, and an author’s historical note.

I thoroughly enjoyed The Haunted Cathedral. Although this book is written for middle schoolers, it speaks to all generations. It deftly combines the historical fiction, mystery, and coming of age genres. The themes of pain, forgiveness, and growing up are universal. The intergenerational dialogue is natural. I recommend this book to all Catholic readers.

After the loss of her child, Rachel goes insane but she must pull her mind back together to solve a murder and save her own life.