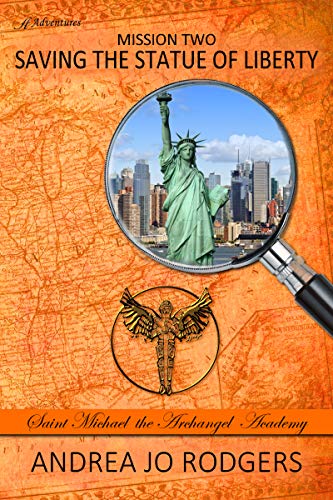 If I had a magic mirror, and all I had to do was step into it to visit anywhere in the United States, a prominent destination on my list would be New York City. What an exciting, historical, and magical place! Lucky for John Jenkins on Team Liberty at St. Michael the Archangel Academy, NYC is the location of his next mission. He and his teammates must rescue “Lady Liberty” from the plans of Team Mischief to vandalize the statue with their sticky stink bomb.

Saving the Statue of Liberty is the second book written by Andre Jo Rodgers that tells an exciting story for young readers while involving them in exercises to learn about America’s national monuments. The first book in the series is Saving Mount Rushmore.

On this new mission, John, and his friends: Raphael, Annabelle, and Shaniqua decipher clues on a citywide scavenger hunt. The clues lead them to important landmarks while providing historical information.

Unfortunately John’s problems are not confined to the mission itself; he also contends with fears of being kicked off the team since his invitation to attend Saint Michael the Archangel Academy was a mistake in the first place. This situation appeared in book one, Saving Mount Rushmore.

Every student at the school must have a special talent or gift. Annabelle is organized and has a strong memory. Raphael is athletic with incredible sight. Shaniqua has the gift of deciphering codes. Unfortunately, John doesn’t seem to excel at anything.

He also misses his parents who are on a medical mission to Africa. Even more upsetting is the text message he receives early in the mission from his grandparents informing him that his beloved dog, Ranger, is sick. John lives in New Jersey, yet while so close to his home, he’s committed to helping his friends save the Statue of Liberty from being damaged. He must have faith that Ranger will be all right.

Though this second book can stand alone, there are parts of Saving Mount Rushmore repeated in Saving the Statue of Liberty. Raphael’s monkey, Mr. Gibbons, who previously caused trouble by finding his way through the magic mirror is no better behaved in this second mission. Again he finds his way through the mirror, and this time must be disguised as a baby since monkeys are not allowed in national monuments.

The personalities of John’s teammates are developed more as we learn about their families. For instance, Shaniqua misses her father who was killed in an accident by a drunk driver. She struggles with the question of why God allowed this to happen.

As a former Catholic elementary principal, I see this starting an important classroom conversation.

Rodger’s series fits the criteria for those seeking good children’s literature with a motivating plot, strong moral values, and well-rounded characters. The story of Saving the Statue of Liberty challenges young people through its clues and puzzles and thrills through its drama. Its messages include acceptance of others no matter his or her situation in life and forgiveness even when mistakes are made. And maybe most of all, it illustrates how a person can rise to be a hero when necessary.