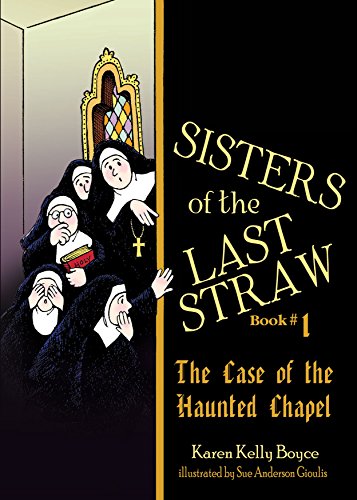 I have rarely found a children’s book that makes me laugh as hard as I did as a child or that has the power to make me grow in wisdom and self-awareness. Usually kids’ books have obvious morals that may seem trite to the adult reader, since of course the books are written for a naïve audience. But occasionally I encounter a story that makes me laugh and that teaches me something about myself.  Karen Kelly Boyce has written just such a series.

The Case of the Haunted Chapel is the first book in the series.  It introduces a gaggle of sisters who attempt to conquer their very relatable bad habits and overcome the hilarious shenanigans their mistakes get them into.

There is Mother Mercy, who believes that by controlling everything she can conquer her bad temper; Sister Shiny, whose OCD obsession with cleanliness, beauty, and perfection causes her  stress; Sister Lacey, who struggles against her potty mouth by contriving increasingly silly exclamations; Sister Lovely, who sneaks a cigarette in the basement every now and then; and Sister Krumbles, who has her heart in the right place but rarely thinks things through.

Book One, The Case of the Haunted Chapel, follows some escapades with new goats, berry jam, and their grumpy neighbor Mr. Lemon’s flower garden. Book Two, The Case of the Missing Novice, follows the sisters as they try to guide a wandering novice.  And book three, The Case of the Stolen Rosaries involves the first actual mystery with real clue hunting, as their neighborhood gets plagued with a thief. Boyce writes in an engaging dialogue-heavy style which will make it fun to read aloud to children at night and had me giggling even while reading it to myself. The illustrations, though few, are amusing and make it a good book for children who want to begin reading chapter books. Each chapter makes for a complete short story, so there is a natural break in which to stop reading and hopefully convince your little one that, yes, it is actually bedtime and we can find out what the Sisters of the Last Straw get up to again tomorrow night.

The mysteries themselves are easily solved, but still amusing. At the end of book one, a new novice arrives, promising a series with a growing cast of characters all with their own amusing bad habits to conquer. This series will teach you and your children to be aware of their faults but laugh and love themselves regardless.