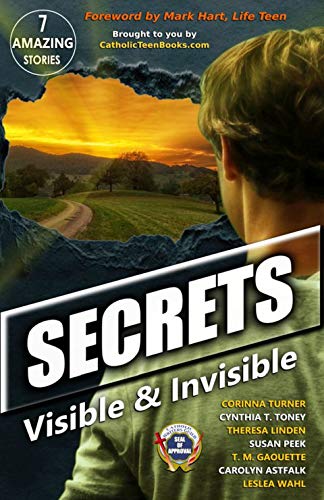 Secrets Visible and Invisible is an anthology of Catholic short stories for young adults. These stories cover a wide range of genres, but they all show instances of young adults being courageous, compassionate, and virtuous. The best part is that these stories are all compelling and engaging in a completely natural way.

The first story is a dystopian by Corinna Turner called “The Underappreciated Virtues of Rusty Old Bicycles.” Margo and her friend Bane have hitched a ride on a military train when a fight breaks out and they end up becoming fugitives, mistaken for resistance fighters running away from the scene. Margo fears failing her Sorting test, for those who fail and end up on the wrong side of the law end up having their organs harvested. This whole short story is actually an excerpt from Turner’s novel I Am Margaret and it’s a great hook to get readers interested.

“Recreation” is a contemporary short story written by Cynthia T. Toney. Darrell and Elijah are out enjoying the first day of summer vacation at the rec center and cross paths with a mysterious old lady on the way there. A Bible verse from Galatians prompts Elijah to make friends with the old lady (named Miss Vivian) and help out around her house. Elijah and Darrell also talk about the future, since Elijah is planning on community college. Elijah’s kindness to Miss Vivian leads to greater rewards than he could ever have imagined.

“The Portrait of the Fire Starters,” written by Theresa Linden, begins with a Catholic school girl Caitlyn Summer planning a camping trip along with her fellow youth group members. All of a sudden, she finds a mysterious painting of her and the other members of her youth group. Nobody knows who made it and things become stranger as the painting starts changing. Thinking that the painting reflects their souls, she and her friends talk about their lives at home and the things they struggle with. Through this, they discover who the artist is. As with the first story, this short story is an excerpt from Linden’s West Brothers series.

Susan Peek’s “On The Brink of Hell” is a historical short story set in 16th-century Italy. It focuses on Dario, a soldier who is badly damaged in the middle of a war. He has lost his legs and is on the brink of death. Dario reflects on his past sins and failures. He fears death because he was a mercenary who fought on the side of the Turks in the Crusades. This short story is a great example of the Catholic meditation “Memento Mori.” This story is an excerpt from The Conversion of St. Camillus de Lellis.

T.M. Gauette’s contemporary short story “Sister Francesca” is about a young boy named Jason who fell in love with a girl that aspired to be a nun. As a young man, used to getting any girl he wanted, he sees Francesca as a challenge and he has a one-track mind, doubting her resolve to religious life. However, their friendship begins to change him. He becomes a more selfless person because “in serving her, I’d be serving Him.” Eventually, he finds his own vocation.

Carolyn Astfalk’s “Behind The Wheel” looks into Sean as he goes out for a drive, in spite of the fact that Sean doesn’t have a license and he’s driving stick at night, all to impress a girl. (Seriously, where’s Uber when you need it?) Unfortunately, he becomes witness to a car accident, tells the cops about it, and ends up getting a police escort home. Sean gets a stern lecture from his father, but the conversation takes an unexpected turn when his younger brother asks his father to help him review the gifts of the Holy Spirit. The gift of fortitude opens up the opportunity for forgiveness and a new sense of responsibility for Sean. This excerpt serves as a prequel to Rightfully Ours.

Leslie Wahl’s “More Precious than Gold” is a contemporary story about Josie, who joins up with her boyfriend as a camp counselor for a Christian summer camp program. She makes it her mission to help out a boy who has a very cynical view of life. Josie and her friends also go on a treasure hunt in search of an old gold cross buried somewhere in the campgrounds. In the process of finding it, Josie is able to connect with the troubled young boy at camp and brings out the best in him.

All of these stories are compelling on their own and all have something to teach to young adults, whether it be about honesty or how meaningful kindness and friendship are. The anthology offers a great opportunity for readers to stretch out of their comfort zone and explore genres they may not have read before. Even though I tend to read a lot of contemporary young adult fiction, my favorite short story from this anthology is actually “On the Brink of Hell” because it showed how facing death can change a person and it left me wanting more after Dario was given a second chance.

I highly recommend this anthology to young adults who want some short things to read for the times between finals and commutes. I think Protestants and secular non-Catholics can also enjoy these short stories, as they go in ways typical Christian fiction doesn’t expect. There’s a stereotype of inspirational stories being heavy-handed, but none of these stories talk down to the reader. They feel authentic and honest.