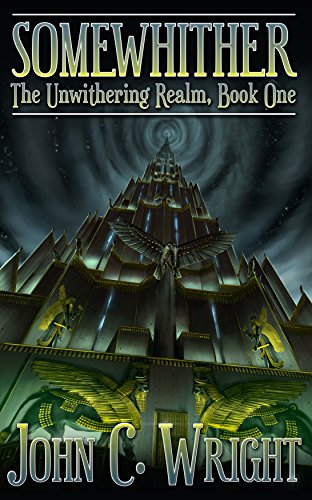 What if the multiverse were real? Only instead of every choice of every person leading to or representing a divergent universe, it was God’s direct intervention that lead to different universes?

That is the world created by Mr. Wright in Somewhither. We learn of it through the eyes of Illya Muromets, a rather strange looking teenage boy plagued with large teeth and a protruding forehead, whose father often goes on strange trips and returns unexpectedly. The elder Muromets is a Templar, a Knight of the Church charged with guarding a thin spot between these realms and preventing the servants of the Dark Tower from entering and dominating our own world.

Audience: YA to adult

Unfortunately, things do not go as planned. Illya has been attracted to the work of Dr. Dreadful concerning alternate realities. He is also interested in the professor’s daughter, Penelope.  Dr. Dreadful’s interest is more than academic, however, and Illya witnesses him opening a portal, to the realm of the Dark Tower. Illya and Penelope are sucked in, beginning an adventure that leads to his learning of long hidden powers, his true heritage and the true importance of keeping the commandments.

Keeping the commandments in this world is especially important as it is the only thing that keeps a person from being outside the abilities of the Dark Tower’s servants to predict. They have perfected the ability to predict all merely mortal and material things in the multiverse. The only people outside of their abilities are apparently those who have been baptized and have keep the commandments since. As soon as someone breaks their word or commits any other sin, they will find themselves in the grip of the Tower. Within this world, Illya also discovers that prayer truly works, recognizing that prayer actually helps accentuate his natural gifts.

The young hero learns most about his powers while a prisoner in the Dark Tower. There, he learns that he may actually be immortal. No lack of food or amount of physical injury seem to kill him. He learns the latter through numerous thwarted escape attempts.

Finally rescued, seemingly by accident thanks to a masked ninja girl, Illya leads a small band through this tower, staying off the radar of the astrologers who rule the tower. As he seeks freedom and a way to stop the astrologers from conquering our world, he battles vampires, rescues mermaids, and learns that his best friend is a follower of Thor.

The book ends on a massive cliffhanger, leaving Illya, Penny, and the other members of his band to almost certain doom, all because Ilya broke his word to a vampire that he had earlier spared which leads to the astrologers instantly being able to locate him and show up with a small army. A mistake we will only see the full consequences of in the forthcoming sequel, Nowhither.

Mr. Wright is a long-time favorite of mine and has once again delivered an excellent, fun, and thought provoking work full of his trademark imagination and detailed world-building. If you enjoy imaginative sci-fi and fantasy then this is definitely for you. I would particularly recommend it for a child in his or her late teens who craves something that is both orthodox and highly imaginative.

Read the review of Book 2 Nowhither