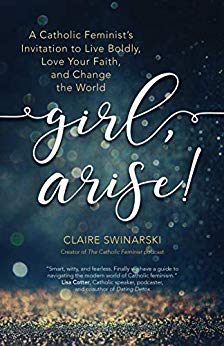 Picture, if you will, a Venn diagram. On one side, there are Catholics. Everyone knows what Catholics are like, right? On the other side, there are feminists. Many people think that these two circles would never intersect. And yet, in the center, we find Claire Swinarski, looking at Feminism in a new light.

In Swinarski’s own words: “to be a Feminist is to believe that women are beautiful, unique, and equal in dignity to men.” Through this book, Swinarski breaks away from the headlines and redefines feminism in a positive light, using her life experience and examples of awesome female saints as a guide.

How does Swinarski redefine feminism? She does so firstly by defining what being a woman is beyond the 1950s stereotypes. To her, women have moxie, i.e. “energy, pep, courage, determination.” She says “You go, girl!” and means it! On the other side of the coin, women also have an inherent meekness. The word “meek” often brings to mind being modest and humble, even repulsively bland. Swinarski defines meekness as: “enduring injury with patience and without resentment.” In other words, meekness can imply inner strength and integrity.

After defining what it means to be a woman, Swinarski goes into aspects of feminism, such as being a leader and a servant. There are many ways for women to serve that go beyond bake sales. To serve is to be like Christ, serving all of humanity. Being a leader doesn’t mean being the most dominant woman in the room. Instead, we are called to have a servant’s hearts even when we aspire to corporate jobs. It also means recognizing that there are ways to be a leader in the Church that don’t involve female priests.

Swinarski also talks about how to be pro-life while also supporting the mother. She acknowledges how divisive the subject is, but she’s quick to point out factors beyond the political talking points. Women consider abortion to be an option because they feel as though they lack other options due to lack of finances or a supportive community. For her, being pro-life means approaching women in a crisis pregnancy with authentic kindness, love, respect, and charity.

This book goes through all the roles women will play in their lives, encouraging them to follow Saint Catherine of Siena’s words to “set the world on fire.” Swinarski encourages women to love themselves as well. I highly recommend this book to women who have preconceptions of what feminism is. There is room in the Catholic Church for every sort of women, from the bold and tall to the introverted and petite and every kind of woman in between.