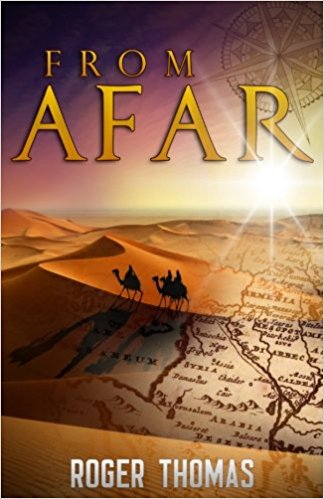 ATTENTION Independent filmmakers: PLEASE find a good screenwriter and produce a movie of this book, From Afar by Roger Thomas. My money is on a hit the likes of Indiana Jones or maybe more appropriately, “The Ten Commandments.” From Afar tells the story of the Three Wise Men on a quest to find the prophesied new king of the Jews. As a movie, it could easily be shown every Christmas season just as “The Robe” and “Ben Hur” are revived each Easter.

Thomas begins his story by introducing Gaspar and Balthazar as astronomers who believe the stars predict the future. Both are pagans restless and longing to find order and meaning on earth similar to what they experience in their analysis of the heavens.

Though they have never met, they coincidently visit their former teacher and mentor, Melchior, in Persia who reveals he has invited them to his house at the same time for one last lesson related to a unique discovery in the alignment of the stars. It appears that the heavens are proclaiming a new king. As Balthazar exclaims, “A king so great that even the skies hail his arrival.”

The dilemma is which king, what king and over whom will he rule?

In his author’s notes, Thomas acknowledges his sources and how he draws heavily from the research of an amateur astronomer to produce the basis of his story and to hypothesize what the magi might have seen in the sky at the time of the birth of Jesus. Throughout the book, Thomas uses his knowledge of salvation history to develop a mind-blowing action adventure based on the short allusion to the three wise men in Matthew, the only Gospel account of their journey.

Various books of the Old Testament contain references to the one who will come to rescue the Jews and that this king will come from the East. Thomas draws on the story of Daniel, the Jewish scholar, who centuries before predicted the fall of all empires and the establishment of the true kingdom of God.

When Balthazar quietly speaks of Daniel, Melchior is energized and wants to know all he can about this unheard-of-prophet. He asks, “Did he read the skies? Interpret entrails?”

Balthazar answers, “Dreams and visions, apparently, my lord. He didn’t have any methods, attributing everything to his god, who not only sent the visions but revealed their meaning.”

Melchior studies the writings of Daniel, finds out exactly when the king is to be born, and invites his students to join him in the journey to Jerusalem to do him homage. Thus begins the quest.

Imagine yourself in a movie theatre, slouched in your seat, unaware of any other people sitting next to you. That’s how engrossed I became in this novel. It follows perfectly the outline of a quest, with the development of the characters revealing interior struggles they each must overcome as they confront exterior forces. The three men gather an entourage to accompany them as they travel through foreign lands where they face danger and even fight for their lives in an epic battle. See why I think this would make a great movie?

Three is the magic number as they face three challenges on their way to find the new king in Jerusalem who they assume to be the child of King Herod. In overcoming the challenges, each man displays certain strengths: Gaspar, strategic experience in battle situations; Balthazar, knowledge of foreign countries and language; and Melchior, wisdom and a deep desire to find the truth.

Of course, in the end, they arrive at their destination only to find that they have made a mistake in their calculations. Herod has no new son but is extremely interested in their search as he too has heard there will be a new king of the Jews. But this is a jealous, hostile interest, and the rest of the story follows as the magi find themselves in danger for their lives.

Although pagans with little knowledge of the coming of a Messiah, they realize the mistake in their astrological calculations and continue on the quest to a small town called Bethlehem. It’s hard to imagine that most people, Christian and non-Christian, don’t know the rest of the story; yet, it’s the details and continued storytelling Thomas brings to the visit of the magi to Mary, Joseph and the baby Jesus that kept me engaged right up to the last page.

I recommend this book to any denomination and to any faith because of its literary value in following the outline of a historical quest. It would be a good read for Catholics looking to evangelize non-Christian friends and relatives. I also think a variety of age groups would enjoy the story beginning with teens. As I said in the beginning, From Afar would make a great Christmas classic film. Too bad I don’t know anything about making movies.