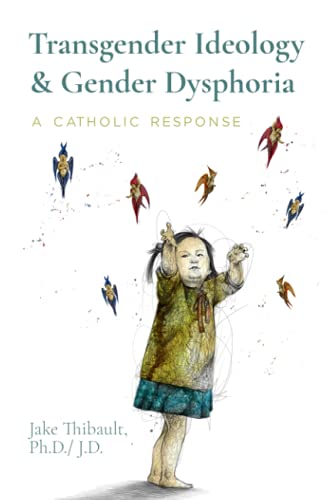 If you have ever had a question about the transgender phenomenon, look no further than Dr. Jake Thibault’s thorough discussion in Transgender Ideology & Gender Dysphoria: A Catholic response. Throughout the book, Thibault views the issue from different angles, exploring how different groups define what have become controversial terms—gender, sex, man, woman, male, female. Even the word “transgender” can mean radically different things. Grounded in Catholic reasoning, Thibault lays out the competing views on the nature of transgenderism.  Ultimately, he offers a pastoral approach for Christians to take based upon virtue and St. Thomas Aquinas’ theology.

The book has 11 chapters: an introduction to his method; a gender framework; the relationship between the Church and culture; an overview of sexual abnormalities; three chapters on the history of transgender science; a discussion of neurodevelopment and transgenderism; the experiences of dysphoric youth; and two chapters on how to respond medically and pastorally. It is an ambitious book, to say the least.

Bearing in mind that this book can be difficult to read, I strongly recommend it. Most of it is surprisingly engaging. Thibault also helps the reader by including an introduction and conclusion to every chapter. If you have a background in philosophy or enjoy more academic works, such as the publications by Word on Fire, you’ll enjoy this. And if you’re willing to take on something that might be outside your reading comfort zone, I think you’ll also be very satisfied. I found I looked forward to reading it more than some fiction because the content was so fascinating.

I consider it a must-read for anyone who wants to approach discussions of transgenderism with both reason and faith. The perspective is definitely Catholic, quoting many popes as well as St. Thomas Aquinas. But any Christian will benefit from the both/and of the information within – we both have to love the people with these feelings and also uphold the truth of God’s design for humankind.

Thibault concludes with a discussion of virtue as a practical guideline for living out God’s plan for those who experience gender dysphoria. I found this section particularly rewarding because the lessons apply to everyone, no matter what crosses they bear. It also reinforces a thread of the book: all people have the same dignity, created in God’s image. It can be easy to be carried away by scandalous events and the rhetoric of some transgender activists, but that doesn’t get to the root of the real issue. Thibault is dedicated to rejecting what is logically unsound while being sympathetic to the people who experience these “other body” feelings. Christians can’t save others through hate.

Even secular readers will find much of interest in the chapters that focus on the scientific studies. While they might not care about the authority of the Church, the overall analysis is thought-provoking to anyone, Christian or not, who is interested in hearing different sides of the transgender debate. And as Thibault doesn’t rely on fiery rhetoric himself, people who want to discuss will find much to engage with.  There will likely be people who dismiss this work out of hand, but only those prejudiced to an extreme view. I suspect the reason Thibault included so much content is for the extreme activists so that he couldn’t be accused of omission.

I will repeat the caveat that parts of this book can be challenging to read. It feels to me more like a dissertation than a book intended for a general audience—it is well researched, but at times dense with academic jargon. It also seems like the final editing may have been rushed, as occasional typos only add to the reading difficulty, at least in the version I had at time of review. The book is already daunting for many readers at over 600 pages, so some may prefer to get a ‘Cliff Notes’ summary. Perhaps we’ll be lucky and receive a shorter, clearer version in the future for pastoral small groups.

But given the urgency of the issue and the need for a Catholic response, I have and will continue to recommend this book to any reader serious about thinking about transgenderism. It is well worth the more challenging passages, and those who enjoy intellectual engagement will not be disappointed.

When We Were Eve: Uncovering the Woman God Created You to be By Colleen C. Mitchell

Remember Eve before the fall, remember the good inside you. A book for those who have forgotten, or are tempted to forget.

The Doha Experiment by Gary Wasserman

For a Catholic reader, the Doha Experiment offers a unique opportunity to understand both the Jewish mind and the Qatari culture.

﻿Unrepeatable: Cultivating the Unique Calling of Every Person By Luke Burgis and Joshua Miller, PhD

Every person is gifted with a primary vocation from birth based on motivational patterns.

Bead by Bead: The Scriptural Rosary by Meggie K. Daly

A scriptural meditation and a moving witness of how the rosary brought the author back to The Church.

After multiple divorces, a suicide, and a murder, Barbara Kudwa shares how she found peace through her faith in God.

“Where the heart is, there will your treasure be.” Uncover what is most important to you regarding your money.

Humorous and Pithy, Fr. Bill has 5 tips for any season of life

An invaluable handbook for pro-life religious non-profits that want to protect life, liberty, and the pursuit of happiness—without risking their tax-exempt status.