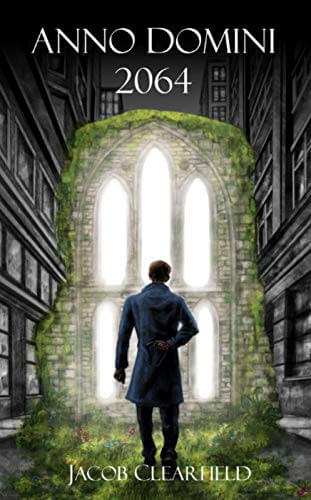 The year is 2064 and the United States of America is now the Golden Republic run by one political party. Religion is outlawed. Citizens are issued a device that records your every move. Loyal party member, Mark works in Milwaukee. He has a prestigious career plus a beautiful girlfriend, Leslie, at his side, with the possibility of being a future inner Party member. In the Golden Republic, he’s living the dream. At least he thinks it’s the dream until Christopher, a new friend, makes him question the world around him through knowledge of the Truth.

Hiding behind an IT profession, Christopher is an unassuming deacon of the underground Catholic Church. He meets Mark and invites him to play virtual paintball with the use of avatars.  Through the guise of virtual games, Christopher slowly reveals the truth. Mark is receptive to Christopher’s teachings and desires more knowledge. It doesn’t take long for Mark to request to be baptized.

Mark is in love with his girlfriend, Leslie. His thoughts often drift to marriage, but the Golden Republic frowns upon such an archaic union. Although marriage rarely if ever occurs among party members, sins of the flesh are highly encouraged. Newly baptized, Mark knows he must live a chaste life according to the teachings of the Church. Marriage is the only way he can truly be with Leslie. He thinks he’s found a way to for them to be married; unfortunately, he doesn’t know if he can convince Leslie.

I was intrigued with Anno Domini 2064 from the first few pages. The dystopian world presented felt like a possibility. Is America moving towards being post-Christian? My heart breaks at the thought of that.

What I appreciated most was that the story was from the point of view of one man on a spiritual journey amidst the chaos of his world. Mark knew the consequences of his actions, but God is bigger than the Golden Republic.

The majority of the action in the book dwells in the character’s interior life. Mark’s inner tension and spiritual revelations are engaging. The dialogue is well written, especially between Mark and Leslie. I enjoyed reading about Mark’s journey to the Church and was brokenhearted when he couldn’t receive the Eucharist at his Baptism. The underground Church is small with only a few priests. In a world where the practices of the Church is forbidden, receiving the Eucharist is few and far between. That scene in the book was a good reminder of how precious the Blessed Sacrament is. Mark’s character is a wonderful example of a man who truly embraced his faith.

This is a great book that seems to have drawn inspiration from past communist regime modern day secular heresies. News junkies and dystopian literature fans will surely enjoy Anno Domini 2064. Catholics especially will appreciate Mark’s conversion as it reads like a future saint’s story.

Christmas Books to Curl up With

Get into the Advent spirit with stories that entertain and don’t water down the holiday.

Sister Aloysius teaches children how to be active in their prayer life.

2018 was a fantastic year for Catholic fiction! Check out our best picks of the year and let us know your favorites.

2017 was an awesome year for Catholic literature. Here are our best finds for every genre.