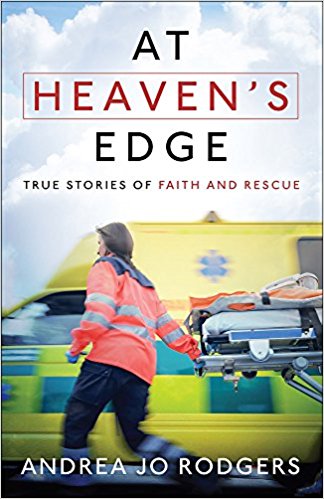 Maybe in my wildest fantasy, I can imagine myself driving an ambulance to a car crash or the home of a heart attack victim to perform a heroic rescue. However for me, reality reminds me of an accident I witnessed right in front of me one sunny afternoon, and though I called 911, I couldn’t articulate the name of the street due to my panic.

Subscribe to Catholic Reads to Get this Book On Sale

Thank God for people like Andrea Jo Rodgers and other EMT team members who as first responders are called to accomplish difficult rescues and save lives day after day with calm courage.

Rodgers became an Emergency Medical Technician 30 years ago when she was still in high school.  She is also a writer, and in her book, At Heaven’s Edge: True Stories of Faith and Rescue, she relates some of her team’s most intriguing rescues with humility and respect for those they help.

Living in a small town means Rodgers often knows the people who need EMT assistance, and frequently her chapters begin with a bit of background information about her relationship to the people or the events leading up to their accident. It is easy to empathize with the helplessness of those in danger – and a little unsettling – when you know a name and a something about them.

For instance, “Late for School” tells the story of a high school friend who lost her life in a head-on collision a few short weeks before graduation, a tragedy not unfamiliar to many of us. Rodgers was getting ready for school a few weeks later when a similar situation caused her to be late for school as she responded with team members to another accident.

DISPATCHER: “Request for first aid at the intersection of Wesley and Second for a motor vehicle accident with multiple injuries and possible entrapment.”

I’m not going to spoil the story by relating the drama of the rescue, but I will say it reminded Rodgers of her friend Janice and “the Lord’s healing presence as He cared for one of his children.”

I appreciate that she never makes judgments about some of the situations she and the team find when they arrive on the scene. Instead, she tells of miraculous God moments that frequently occur, whether the patient is saved or expires. Regardless of the outcome, Rodgers never fails to offers prayers of thanksgiving or prayers for peace.

One such story involves three young college students, friends in high school, who meet for a reunion at a restaurant enjoying dinner. The evening seems perfect until they separate for the night. It isn’t long after two of the friends drive away before the call comes into the first aid team.

DISPATCHER:  “Request for first aid at Kingston Avenue and the railroad tracks for a car hit by a train.”

Again I don’t want to be a spoiler, but not all rescues are so serious.  In fact, some are quite humorous if not a little strange. A call comes in one day asking for a squad to respond to a local hotel on Thursday evening for a special assignment. The squad leader chooses Rogers and two other team members to drive the ambulance and to “act extremely professional and do things exactly by the book.” Rodgers documents the confusion experienced by the team, but they are surprised a few days later when the call comes in about a murder at the hotel. Fortunately, upon arriving at the scene, they find the murder victim is part of a Murder Mystery Theatre.

Law enforcement officials are usually the ones who call EMTs. As first responders, they administer first aid and are prepared to assist official medical personnel when they arrive on the scene. Rodgers explains how she and her team humbly back off when the experts appear, but she relates times when she follows a patient or visits family members offering a listening ear along with her prayers.

Rodgers also is a therapist in a trauma center where she has worked for the past 20 years. She holds a clinical doctorate in physical therapy and occasionally gets to help the same patient recover from the injury that first brought them together.

I admire her ability to find time to write and am grateful for her detailed stories that ring with truth, integrity, and faith in a God who is always present.  I recommend this book as an appropriate recounting of the courageous acts of mercy demonstrated by first responders, law enforcement officials, and medical personnel. During a time in our society when they are sometimes portrayed as less than heroes, Rodgers’ many stories reestablish the faith we need in those who place their lives on the line every day to keep us healthy and safe.

Subscribe to Catholic Reads to Get this Book On Sale