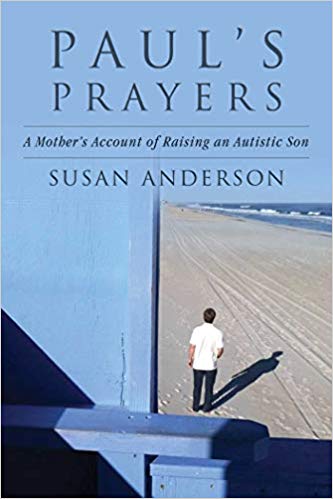 We cannot know what life is like for others until we walk in their shoes. That for me is the summation of the best quote from To Kill a Mockingbird by Harper Lee. How true that is in Susan L. Anderson’s memoir Paul’s Prayers. She writes her life story with deep feeling in her “Mother’s Account of Raising an Autistic Son.”

My limited experience with autism is in an educational setting working with parents who for the most part are supportive and instructional in how to work with their children. I like to think of myself as compassionate, but after reading this memoir, I realize how little I understand their family life or the struggles faced by a child with autism.

Anderson relates how her pregnancy and birthing of her first child appears to be typical of most young couples until there comes the arrival of “the Marauder” – the name they chose to identify a seemingly unidentifiable anomaly in their son’s behaviors – when Paul was about six weeks old. His pattern for the afternoon became a period of screaming cries, and nothing she could do would sooth him. She describes it as a sudden South Florida storm. “Within minutes, a sunny blue sky would transform into a torrential squall: wind, rain, thunder, and lightning. And as suddenly as it came, it would leave.”

Information about autism is more available now than in the time of Paul’s early childhood, so Anderson and her husband, Ron blindly developed their own methods for helping their son function in his environment. The first ten chapters of the book follow a typical memoir pattern of chronology progressing with the family through the years of childhood and how they learned to cope with sensory issues and interruptions to regular routines that caused meltdowns.

Brutal honesty in Chapter 9 reveals hard truths about life with Paul, especially in regards to a major change in the family living arrangements. When they moved to a different home across town with more traffic and a smaller backyard for Paul, “it was catastrophic.” Anderson pulls no punches in expressing “bizarre behavior, painful as it is to revisit it.” Finally in Chapter 10, called “The Verdict,” a special education teacher names it for them. “We believe your son is moderately autistic.”

Anderson’s writing style from that chapter on becomes less like a memoir and more like a private journal: retaining its authenticity, sprinkled with southern hominess, revealing of episodes and explanations of Paul’s life from adolescence through adulthood.  If you try to follow the chronology of his life, it’s difficult, but each chapter is riveting in its content.

As Paul matures, he recognizes his gifts and limitations. He writes about his thoughts and feelings and develops a way of dealing with life through cross-country running and socializing with people who understand his mannerisms and handicaps. He has a strong faith gained from his parents.

The most poignant segment of Anderson’s memoir is the chapter called “The Writer/The Prayer.” It is where the name of the book is deeply revealed in the final paragraph. “For Paul, in all of his struggles and suffering, has brought forth in all of us a salutary appreciation in practicing selflessness. He’s got it, that interior connection with the divine. We watch, we listen, we feel…Paul’s prayers.”

Anderson discusses in one chapter the dilemma faced by parents whether to vaccinate their children or not. She wishes the CDC (Center for Disease Control) would do more research into the possibility that autism is caused by vaccinations at an early age. Her children following Paul’s birth did not receive the usual shots until one of her daughters contracted pertussis. She then vaccinated but chose her own schedule for time and follow-up.

Reading this book, I felt the optimism of the author for the most part. Yes, she revealed frustration and exasperation at times, but mostly, this book is hopeful, faithful, and full of the recognition of God’s graces whether through the heroism of her son or the acceptance of people in their lives who supported them.

We can’t know another person’s life until we walk in his shoes, though Anderson lets us see through her eyes so we can know a little more. I am sure many people with children of special needs will relate to her story.

I recommend this book to all people of any religion or non-religion. Everyone can use a powerful lesson of acceptance and unconditional love.