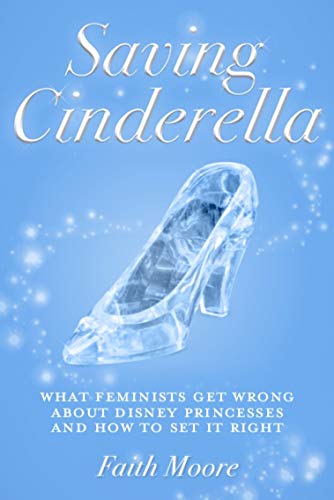 The internet is full of memes deriding the Disney Princesses and their Princes that we and our parents grew up with. Prince Charming has a creepy foot fetish, Snow White is a fool who doesn’t know not to take things from strangers, Belle suffers from Stockholm Syndrome, etc. We all know the drill. Truth be told, most of us have probably chuckled at them, amused by a cynical take on a childhood classic.  The problem is that these cynical, superficial takes on the classic fairy tales are actually taken seriously by many people today. It is now common for movie critics and cultural commentators to disregard even more modern princesses like Ariel as nothing more than marriage obsessed damsels in distress.

This is a grave injustice, one that Faith Moore does much to set right in Saving Cinderella. In her first book, Moore takes these critics (henceforth to be referred to as PCs, short for Princess Critics) head on, charging them with a gross and agenda-driven misunderstanding of the movies that made Disney a household name.

Princess by princess, Moore shows the reader how each one is far more than she seems, how they aren’t merely naïve girls waiting around for a man, any man, to rescue them. She gets off to a great start with an in-depth analysis of Snow White. Far from being a girl happy to wait around for a man, Snow White is shown as exhibiting a high degree of resourcefulness when she offers to cook and clean for the dwarves so long as they let her stay in their home and hide from the Evil Queen. By doing this, Snow White is making use of her only marketable skills to stay alive. Nor does she necessarily love her state in life. The Whistle While You Work song isn’t about all the joy Snow takes in her chores; it’s about distracting herself from the drudgery of them; she’s actively trying to insert joy into her day.

Even her relationship with the Prince is more than simply two people falling in love at first sight. The author makes a convincing case that they likely would have met many times before, but that isn’t even the point. Snow White and the Prince represent things far deeper than characters on a screen.

The real heart of this book is Moore’s focus on the nature of symbolism in fairy tales. In a fairy tale, nothing is only what it is on the surface. A dress is not a dress, an apple is not an apple, and a slipper is not a slipper. The characters are archetypes and not necessarily as people living and acting as they would in the real world. The Princess and the Prince represent the feminine and masculine ideal. No, not a physical ideal as the PCs would have you believe. The physical appearance of the Princess and the Prince represents their character, their virtue. In this way, the dress, the slipper, all of the external things merely represent who the Princess really is and lets others see her, the real her. She is a person who is strong, unwilling to allow her spirit to be crushed by the circumstances of her life. The Princess puts others first without sacrificing who she is.

PCs, so critical of the early Disney movies, stay on the superficial level. They only see a glass slipper and a square jaw and then proceed to judge everything according their own stilted and politically-charged worldview.

Moore doesn’t stop with a defense of the princesses of old though. After all, the book is about saving Cinderella, not defending her. She goes on to chronicle how Disney has allowed the PCs to basically take over to the point where filmmakers are now actively and explicitly trying to subvert the fairy tale formulas that long-time fans of Disney have taken for granted.

Beginning with Jasmine (I would argue that the signs were actually present in The Little Mermaid) the author shows how Disney quickly adopted the critiques of the PCs, almost desperately trying to gain their approval. First, Jasmine is painted not as a graceful, virtuous woman who inspires her Prince to be better than he is (like Belle and the Beast) but as a petulant and defiant brat who berates her Prince into the man she wants. Disney has followed this same road until movies like Brave and Frozen actively reject the ideal of the Prince, apparently preferring that the Princess grow old and alone rather than ever find fulfillment with a man (any man).

We are still left with the question – How do we save Cinderella? Moore’s discussion of Beauty and the Beast and Tangled, I think, show the way forward. Both of these movies provide a near perfect blend of fairy tale symbolism and the modern penchant for more flawed and realistic characters. Both films are easy for modern audiences to relate to while still conveying all the higher ideals of the older fairy tales. They can also serve as a key to those older tales, to take the lessons learned within and reteach the language of symbolism that the modern world has forgotten to our own children. Then they too can experience the joy we and our parents did when seeing these films for the first time.

Thus inoculated against the anti-myths of the PCs, perhaps our own children will one day take up the Shield of Virtue and the Sword of Truth and use them to create new tales, new myths that draw from and build upon the old. Not only will they save Cinderella, they’ll create sisters for her worthy of filling her shoes, or glass slippers.