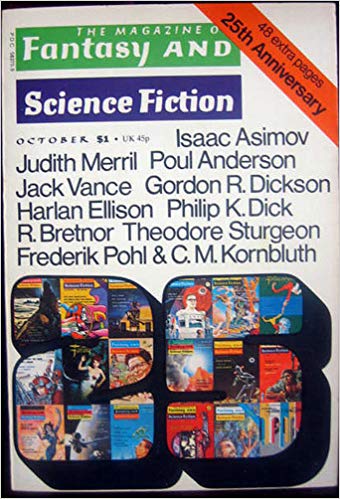 This was the magazine that originally published the infamous Pro Life short story by Phillip K. Dick. If you find a copy for sale the original publication is the ONLY way of having the story in paperback form. Even the ebook only survives as pdfs on random prolife or university websites.

The Pre Persons by Philip K. Dick remains one of the most chilling stories I have ever read. It depicts a world in which abortion is not only legal, not only accepted, but celebrated. At one point, a woman suggests to her husband that they should get an abortion. “Don’t you think that’d be hot?” she says. The laws are such that there are no restrictions on when you can kill an unborn child. In fact, it is far, far worse than that. In this story, it is perfectly legal to ‘abort’ a child up until the age of twelve.

The story opens in the middle of such a scenario. Walter is hiding from the abortion truck, a vehicle exactly like those that catch stray dogs, while it patrols the neighborhood. As it turns out, the patrol is searching for one of his friends. When he goes home and expresses his fear to his mother, she calmly reminds him that the truck can’t be for him. He’s twelve and “the law says he has a soul.” What determines the possession of a soul? According to the government, you have a soul when you have the ability to do basic algebra.

The author uses this ridiculous criterion to show how arbitrary the line is that was drawn by the Supreme Court in the Roe v. Wade decision. To decide that a person is only alive after he is born is every bit as arbitrary as saying the child is alive only after he can feel pain, or can walk, or is viable…or can do algebra.

Ed Gantro decides to call out this lunacy when his son, Tim is picked up because he doesn’t have his D-card. The D is for ‘desirability,’ and any child without it is considered a stray. Ed, unable to legally prevent his son from being picked up and taken down to ‘the pound’ decides to claim that he should be aborted as well. Despite having graduated from Stanford, he’s forgotten how to do algebra and therefore no longer has a soul. The final resolution to the story is a happy one, but it is far from satisfying, being that it is only temporary. Gantro, his son, and the other children in the truck are allowed to leave.

In this story, Philip Dick demonstrates how society can get to that point, the gradual slide from killing an unborn child to killing an eleven year-old child. If that still sounds impossible to you, keep in mind that two weeks before writing this (January, 2019), the Governor of Virginia was on a radio show openly talking about killing a baby that had just been delivered. Also consider that there was a bill to prevent that sort of thing from going on in the Illinois state legislature over ten years ago, which indicates that this was already a real issue. Finally, when I learned about The Pre Persons, approximately a decade ago, it became legal in the Netherlands to euthanize a child for quality of life reasons up until the age of…twelve.

The fact that The Pre Persons was written in 1974 by one of science fiction’s most respected authors, explicitly as a response to Roe, is astonishing in its own right. Mr. Dick wrote the stories that films like Blade Runner, Minority Report and many others are based on. His stories continue to be reprinted individually and in collections available in virtually any book store. But this book has not been made into a film or included in collections. I scoured the internet and Barnes & Nobles for it over a decade ago when I first learned about the story. The only place I could find it was the original October, 1974 issue of The Magazine of Fantasy and Science Fiction that it was first printed it.

The fact that The Pre Persons describes so well the central fallacy of the pro-abortion argument and did so immediately after Roe v. Wade is enough reason to recommend it. It foretells the trajectory of our laws over the ensuing decades; the trends of relationships between the sexes; increasingly utilitarian attitudes towards children.  It was written by an acknowledged master of Sci-Fi, but the story seems to have been intentionally suppressed by mainstream media. It is a must read. If you can find it.

Our favorite book finds of the year!
Read More

A man-hunt across space that forever changes both the criminal and the detective.