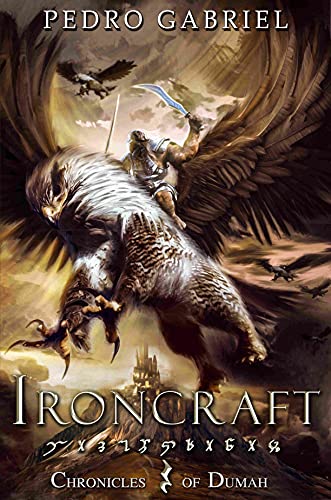 All fans of epic fantasy

origins of war, consequences of choices

This epic mythological fantasy is a Biblical-style tale that reads very like a work of tie-in Genesis fan-fiction.

In a pre-human era, giants live peacefully on their world, reverencing their Creator and the sylphs that live in the stars and the planet. Although they have known calamity and battle against monsters and natural threats, war is unknown—until a sylph descends from the stars speaking of coming doom for all giant-kind. But is the meddling sylph’s warning genuine—or will it become a self-fulfilling prophecy?

Ironcraft shows how our choices shape our future, and how doing wrong out of fear is likely to bring about the very thing we seek to avoid.

This book has strong Catholic connections on several levels, ranging from the Biblical names that are used for places, to some of the deeper themes. However, there is no overt Catholic content—it is a work of high fantasy. God the Creator is referred to as Aigonz, and the reader is left to speculate that the ‘sylphs’ of the air and earth may equate to Biblical angels. Similarly, by the end of the novel, a great mythological hero (whom I will not name for fear of spoilers) is becoming more and more clearly a likely Christ-equivalent.

Full disclosure: This book is not written in my preferred style, but I think it is a fine achievement in its own right. It may, however, not be to everyone’s taste, since it is written in a close (though not exact) replica of Old Testament or similar ancient text style: a third-person, distant narrative voice that follows multiple characters (most of whom are unpleasant or going from bad to worse). It does not single out good protagonists to follow nor get inside their heads. It is not so much a novel as a mythology. Although written about giants, the story offers a deep commentary on human nature and the origins of war, especially chilling and poignant to read in 2022.

The biblical tie-in aspect of the story is reminiscent of Genesis 6:4:

The Nephilim were on the earth in those days, and also afterward, when the sons of God came in to the daughters of men, and they bore children to them. These were the mighty men that were of old, the men of renown.

Although the final quarter of the book, and a note from the author at the end, dissociate it from the Biblical narrative, I think it safe to say that the story was probably inspired and heavily influenced by the Nephilim from Genesis.

Ironcraft is the first book in a series, and as such does not provide closure at the end. A significant character who escaped earlier in the book has not returned—no doubt this will follow in a later book—and other immensely significant elements such as the giants’ third eyes and the new means of reproduction have not been fully explored. By the end, most of the characters are dead or corrupted or fallen: so it is not a cheerful book (in this too it resembles the Old Testament).

This book would be a good read for fans of mythological-style or actual historical texts. Anyone who reads the Old Testament for straight-up pleasure (as opposed to prayer/study/edification) would probably devour Ironcraft. Fans of the Silmarillion, Iliad, Odyssey, and other such texts, old and new, would probably also like it. However, if you enjoy modern first person or close third person internalized narrator point of view and prefer to have at least one good character consistently present throughout a book to root for, Ironcraft probably will not suit you.

Although Christian readers, both Catholic and Protestant, will enjoy the Biblical names and themes, this book is equally accessible to secular readers. It contains no more overt Christianity than the Lord of the Rings (which is to say, none!). Readers suffering from low spirits, especially relating to the current world situation, might be best to give it a miss.

Ironcraft takes the reader on a convincingly mythological journey into the birth of mankind, and gives a deep and insightful commentary on human nature through a bleakly convincing look at how war might come into a world.