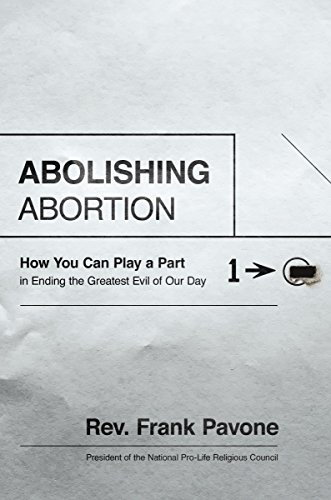 Abolishing Abortion is two things: a legal manual on how churches (of any denomination) can work to end abortion without losing their tax classification as a nonprofit organization, and an analysis of Fr. Pavone’s best rhetorical and civic strategies for ending the genocide of abortion in America. Regardless of whether you end up agreeing with Fr. Pavone’s preferred strategies, this book is still one that I think every priest, deacon, preacher, imam, and rabbi should have on their bookshelf—if only because of the sound legal advice regarding nonprofits and social/political activism.

What impresses me is that this advice isn’t just practical for tackling the issue of abortion, but any issue in which a church is called to speak up for justice and morality in American politics. When I met Fr. Pavone in person, I even teased him that he should watch out, because any religious nonprofit—even those of his political enemies—could glean actionable advice from his book. He agreed with me!

I am surprised to learn that the fear religious non-profits have about losing their tax-exempt status through political involvement is largely built upon hearsay and exaggeration. These exaggerations arise from a section of IRS tax law called the Johnson Amendment. This amendment states that an entity would not be recognized as a 501© (3) tax exempt non-profit if a “substantial part of…[its] activities… is carrying on propaganda or otherwise to influence legislation. Fr. Pavone argues that this is rule is worded so vaguely that it is virtually unenforceable, a claim he backs up with quotes by multiple lawyers, outside studies, Supreme Court decisions and even from IRS training materials. In fact, “in the sixteen-year history of the Johnson Amendment, among the three hundred thousand churches in America, only one church has lost its tax-exempt status, and that for just one day, and not one has lost its tax-exempt status because of something preached in the pulpit, taught in a classroom, printed in the church bulletin or distributed to the congregation” (pg 84).

I particularly wish that Fr. Pavone’s chapter on the role of religion in a democratic society were widely read. If you or anyone you know is afraid that movements like the Pro-Life movement could possibly lead to a totalitarian theocracy, then it will be a relief to hear that a major pro-life spiritual leader like Fr. Pavone opposes such a goal. He says, “The Declaration of Independence affirms the universal right of life, liberty, and pursuit of happiness, our government already reinforces what the Church teaches. To hold the Sate accountable for protecting those fundamental rights has nothing to do with imposing religious beliefs and everything to do with reason.”

Perhaps the only issue that a pro-life reader might argue with in Fr. Pavone’s book is his argument about showing images of abortion and aborted victims. However, I will refrain from summarizing his arguments here because they should be read in their full context. It’s a contentious topic and I do not want to sow misunderstanding by over-simplifying his position. Besides, I think anyone on any side of this issue will appreciate exploring Fr. Pavone’s even-handed input in this debate. Although I can see possible logical arguments against his position, he does state his position clearly and adheres to consistent rhetorical principles and credible evidence. So regardless of the reader’s own position on the use of images in pro-life demonstrations, this is a great contribution to the discussion that doesn’t devolve into demagoguery.

The subject of whether or not using graphic images in pro-life strategies is appropriate is so contentious in fact the staff here at Catholic Reads anticipates some criticism for promoting a book that supports using these images. To those critics I can only say that it is not this publication’s duty to approve or disapprove of this particular rhetorical strategy. Nor is it our purpose to take a position on every tweet or controversy a politically active priest like Fr. Pavone might elicit. Amongst the staff here there are mixed opinions as to whether using graphic images of abortion in the pro-life movement is an appropriate tactic. Ultimately, our goal in reading and vetting books is to determine two things: is this book well written and does it conform to Catholic dogma and tradition? On topics where the Church hasn’t clearly spoken we endeavor to remain unbiased and allow both parties to have their say but also to use our reviews to let readers know ahead of time the sorts of books they might be getting themselves into. Neither is it our place to pass judgement on an author’s character. Our focus is on the text of the book itself, it’s quality and its orthodoxy. Thus, we have no more qualms about presenting the Catholic reader with this book than we would a similar book arguing against the use the graphic images in the pro-life movement. Indeed, if we are to save the unborn we MUST make room for these very discussions in order to ensure the Church’s actions are effective.

Fr. Pavone doesn’t just focus on group action and analytical civic strategy. “The first step in abolishing abortion,” he says, “is to examine our own hearts and to repent of the role we each have played in allowing this holocaust to happen” (pg 43). Throughout this book, he calls everyone to repent of all the little ways we support this industry in our society: our callous attitudes towards vulnerable mothers; our negligence towards the poor, the immigrant and the orphan; or our lack of compassion towards abortion industry workers and women who’ve had an abortion in the past. At the same time Fr. Pavone argues that it is demeaning to belittle the harm and pain done by abortion—not just to the child but to everyone involved. He delves into the suffering of abortion workers and the women who have survived an abortion. “These are not enemies,” he says, “these are people in pain” (pg 183).

Fr. Pavone’s arguments for what kinds of action and rhetoric are most effective for ending abortion are heavily inspired by the Abolitionist and Civil Rights movements. Speaking as a Rhetoric major, I am gratified to see his argument is based upon classical foundations for free speech, its limits and responsibilities. Even if you end up disagreeing with his conclusions, it’s intellectually satisfying to analyze an argument made consistently and dispassionately.

What can a man do to love his family as he should?

As an EMT Rodgers has seen God work in ways that defy medical analysis.

Bead by Bead: The Scriptural Rosary by Meggie K. Daly

A scriptural meditation and a moving witness of how the rosary brought the author back to The Church.

Humorous and Pithy, Fr. Bill has 5 tips for any season of life

A mother reveals with honesty and authenticity the difficulties of raising a child with autism and the struggles that child faces every minute of every day.

In this year of tragedy, Rodgers reminds us of the miracle of human kindness.

Me, Ruby & God; A Journal of Spiritual Growth by Linda Crowley

﻿Unrepeatable: Cultivating the Unique Calling of Every Person By Luke Burgis and Joshua Miller, PhD

Every person is gifted with a primary vocation from birth based on motivational patterns.