The Doha Experiment by Gary Wasserman 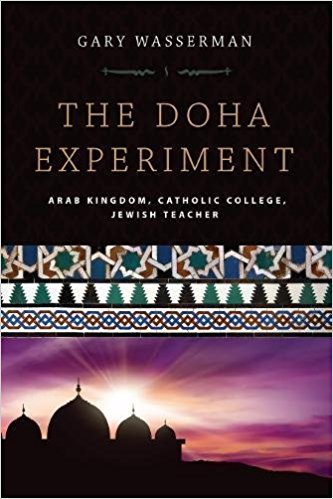 An Arab Kingdom, Catholic College, Jewish Teacher, or so goes the tagline. In all honesty, it’s more about a Jewish teacher in a Muslim Country. I do not know much about the Georgetown University that Gary Wasserman hails from, but I gather that even if it does have a vibrant Catholic culture, Wasserman mostly hangs out with the secular crowd of professors. As a secular man, Wasserman expresses support for an actively gay lifestyle and even records some interesting passages about life for the same-sex-attracted living in Qatar. Thus, this isn’t a book for all Catholics, and it does not present any sort of orthodox worldview but it offers a unique opportunity to understand both the Jewish mind and the Middle Eastern, Sunni, Qatari culture, and to examine both points of view in contrast with each other outside a western Christian framework.

The Doha Experiment is about Wasserman’s journalistic research and experiences teaching in Doha Qatar. Due to owning the third largest natural gas reserve in the world and being the second largest exporter of oil, the 313,000 native Qatari are inordinately wealthy but also dependent on their limited oil resource and world oil prices. Before oil, Qatar was only a collection of tribes and small villages that lived off fishing, pearling, and piracy. Even today they import almost all their food. Attempting to diversify their economy and prepare their children to compete in a world market, the monarchial ruling family of Qatar approached several prestigious American colleges and negotiated contracts for those colleges to build satellite campuses in the capital of Doha. The colleges are: Texas A&M for training oil and gas engineers, Northwestern University for training journalists, Virginia Commonwealth for training artists, Weill Cornell Medical College for training medical staff, Carnegie Mellon for computer experts, and Georgetown for training international diplomats. There is also the French university, HEC Paris, providing graduate programs for mid-career CEO’s and executives, and the British university, UCL for archeology, conservation, cultural heritage and museum studies. Qatar generously built and funded the whole project, dubbing it “Education City.”

By moving the world-renowned American college system to Doha, the Qatari hope that students are encouraged to stay and work in Qatar, and that by learning from the world’s leading cultural power from within their own country, the next generation will learn to take the best from American culture without abandoning their traditional values and loyalties.

For Georgetown’s part, the establishment of a satellite college presents an opportunity to engage a foreign culture in dialogue and influence its children to think critically and morally.  Qatar is a small country in the Middle East, between Saudi Arabia and Iran ruled under a nondemocratic, monarchy under which Bibles are banned and free speech restricted. On the other hand, it’s one of America’s strongest allies and seems willing to learn to tolerate free speech, at least as far as the campus grounds go.

It’s into this melting pot of cultural exchange that Wasserman lived and taught for eight years. The Doha Experiment is part memoir and part journalistic analysis of whether this enterprise is really achieving either the Qatari’s goals or Georgetown’s. Of particular importance to Wasserman is whether or not Georgetown is living up to its own moral standards or compromising them, as it faces issues like banned textbooks and teachers whose visas are not renewed after making some anti-monarchial statements. In one account by Wasserman, a teacher begins to lead his class into the migrant worker camps to interview the population of 1.5 million there. His intention was to research how migrants are treated and to find ways to help solve some of the problems they face. This risked embarrassing the host country, and some of the students were later told to cut back their involvement in charity work for the migrant workers or risk their government-funded scholarships.

But the Doha Experiment is far from an accounting of the evils of a small Middle Eastern country. Wasserman fairly points out the many ways that the Qatari ruling family tries to act justly and with wisdom. There are instances when one of the queens of Qatar personally steps in to protect freedom of speech and faith for the university’s staff. In a conversation Sheikah (Queen) Mozzah had with a Georgetown representative, the professor got rather blunt with her in defending Georgetown’s Catholic roots as necessary to the quality of education she wanted for her children and her country. The Queen diplomatically replied that was fine. That Catholicism had been able to make the transition from an extremist position to one more liberal and diplomatic without abandoning its traditional values, and that Islam would benefit from learning how to make that transition as well. It hardly needs stating that this reviewer doubts that Catholicism itself could ever be labeled “extremist” (according to the current definition of such a word), but I appreciate the Al Thani ruling family’s attempts to build bridges between their culture and ours. Such a statement requires no small amount of humility from a Queen.

For a Catholic reader, the Doha Experiment offers a unique opportunity to understand both the Jewish mind and the Qatari culture. At first, I was frustrated because I, as a Catholic, had many questions that did not seem to occur to Wasserman to ask, but then Wasserman, as an American Jew, poses some questions to his Middle Eastern students that did not occur to me.

For one thing, he frequently has to put down conspiratorial assertions that the Israeli government was behind the 9/11 attacks. He takes some of the students on trips to Israel and Auschwitz to help them understand and humanize their Jewish enemies. Although not religious, Wasserman eventually realizes that part of his job is to be a Jewish man. Many of his students have never known a Jew and do not recognize his last name as Jewish. Simply by befriending his students and being a real living human, Wasserman forces many of his Middle Eastern students to reevaluate preconceived notions.

It would have been much more conventional for this to be a book in which a Catholic worldview encounters a Jewish or Muslim one, but as this is a Jewish mind encountering a Muslim culture I found it a unique perspective allowing me to tap into and understand some of the preconceived instincts of both. Wasserman’s tendency to refer to tribal loyalty and equate it with the Qatari’s tribal structure was one language habit that surprised this mixed American. On the Qatari side, I was surprised how suspiciously democratic their monarchy was. Qatar is organized according to small tribes and families, and the Al Thani rule through negotiation and compromise with the others. There is no democratic voting system, but there are Majlis or family councils. A political scholar at Georgetown estimates that it takes the approval of at least thirty-five families to ensure continued government support of projects like Education City. Of course, how democratic the processes are within the Majlis is anyone’s guess, but it shows the small size of Qatar and is a round-about way of measuring public consensus.

Although this is not a book for building bridges between Catholics and other groups, I think any curious Catholic reader will find the Doha Experiment an excellent read to understand and humanize two other followers of the God of Abraham.