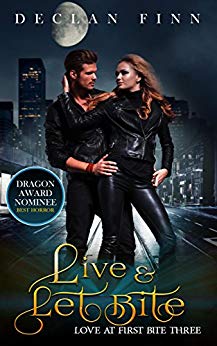 Marco and Amanda don’t get much of a chance to rest. In Live and Let Bite, we find that mere days after taking down Prince of Hell, Asmodeus, Amanda is tipped off to another threat on the horizon. Unfortunately, following the warning of President of the New York Vampire Association and somewhat reluctant ally to Amanda and head of the New York City Vampires Association, Jennifer Bosley causes other problems.

For those who read (Warning! Spoilers ahead) the previous books in Declan Finn’s Love at First Bite series, you know there has been no small amount of romantic tension between Marco Catalano and Amanda Colt, a tension that Marco was finally able to admit to himself and others at the end of the last book. Going toe-to-toe with a demon and getting some good life coaching from your guardian angel will give anyone some perspective. At the end of the last book, he acted on it, sending Amanda a detailed email describing his feelings. He would have told her in person of course but after defeating Mr. Day, Amanda went back to New York while Marco remained in San Francisco. In any case, Amanda didn’t open the email for months, something that Marco did not deal with well.

As you’ll find, Amanda was just busy tracking down the latest threat to Marco and everyone else, a threat that manifests itself in a big way by coming after everyone that has ever helped Marco in a massive and coordinated attack. Here, we are introduced to the concept of minions, people who have been given enough vampire blood that they can be controlled but not so much that they can be turned. This naturally makes them stronger and faster than the average human, making life far harder for Marco’s crew.

This results in things like a massive gun battle in the middle of San Francisco, a battle that introduces them to Nuala, the vampire who assassinated Mikhail, leader of New York’s vampire gangs after Marco defeated him at the end of Honor at Stake. Nuala is a very old vampire, powerful enough to handle direct sunlight for short periods and has an evil enough reputation that they are actively worried about her manifesting soul fire, which is pretty much the peak of a vampire’s destructive abilities. During the battle, she almost single-handedly takes out the whole crew in hand-to-hand combat, something no one has come even close to doing.

Barely surviving this initial encounter, Marco has to use everything and everyone at his disposal to develop a plan capable of taking down Nuala. Merle and his gang are included, along with the Vatican’s own team of vampire hunters, referred to my Marco and Amanda as the “Vatican Ninjas”. I won’t spoil the details but the intricacy of the plan further cemented my impression of Marco as basically this world’s Batman. He may not have any powers, but he is the last person that you want mad at you.

The final battle is interesting on many levels as well and not just for the planning that went into making it happen. After the battle is over Amanda manifests some new abilities that indicate she is growing in power and that the catalyst may be her connection with Marco. The young vampire slayer also does something interesting during the final confrontation with Nuala. I won’t spoil it, but what Marco does with Nuala at the end may seem out of character at first but in a good way.

One might be wondering whether or not Marco and Amanda actually come clean about their feelings by the end of the book. I don’t think I’m giving anything away by telling you that they do. Not that there isn’t still a lot of hesitation involved. Amanda is, after all, a hundred-year-old immortal vampire and Marco is a 19-year-old genius and borderline sociopath. There are some kinks to work out.

In the end, Finn gives readers another fun, vampire-slaying romp through the underworld that expands the lore, makes better use of some secondary characters, and trims some of the fat that the previous book suffered slightly from. With one more book left in the series, the question you should be asking is, “What could be sent after Marco that would be worse?”