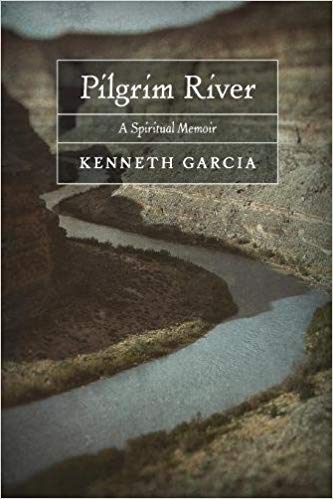 This memoir by Kenneth Garcia starts with a wild ride through the undisciplined, brawling world of adolescence and friendship in the small town of Elko, Nevada. He describes how he and his buddies drank, stole, shot innocent animals, and visited cathouses, all as though it is the usual journey of becoming a man, forcing me to ask myself a serious question. Is this really a spiritual memoir?

Relief came for me and, I think, for Garcia when he recognized that somehow he just didn’t fit in with the rest of the guys especially as he relates his naivete and total awkwardness when propositioned in the cathouse. (This part is quite humorous as he finally understands the prostitute wants more than casual conversation.) He begins to ask his own questions about “what the hell was I doing and why?”

From there Garcia’s narrates his winding and sometimes backtracking road to discover a greater world created by love and filled with a divine intellect he eventually learns to call God.  His prose is clear, vividly descriptive, at times poetic and always, always honest. This isn’t a man who tries to cover his flaws or rationalize his mistakes. He names himself an introverted loner, “semi-autistic,” but an avid reader, called to “couple higher learning with ongoing spiritual formation, the life of the mind with deeper initiation into the mystical life.”

How he came to his conversion to the Catholic Church is the meat of the book. Garcia came from an abusive home, void of religion though his mother was Presbyterian and took him and his siblings to church with her a couple of times. By thirteen, he concluded there was no God. After high school graduation, he worked a summer job looking for gold in the Nevada hills with an assistant geologist, a rough older man who drank heavily and cussed creatively.  It was then that the beautiful solitude and wide-open spaces brought Garcia a sense of “primordial power. Could it be called Spirit?”

He started college, but during the Christmas break in his sophomore year, a hunting accident involving two of his carousing buddies landed him in the hospital, out of commission for a period of months, and blinded in one eye for the rest of his life. The convalescence gave him plenty of time to “ponder life” and read some great literature. He also started writing reviews of the books he was reading and fragments of memoir regarding his childhood and family life.

“I see a small-time scholar and a semi-autistic loner, a flawed man who has persistently sought the Holy. The Quiet One.

An insurance settlement from the accident provided money for Garcia to buy a truck and camper. “I wanted to go it alone, like Henry David Thoreau, or at least the idealized Thoreau based on the book Walden. I had become increasingly aware of my need for solitude.” Garcia decided to go to Canada, but since it was winter, he traveled instead to Mexico.

His great-grandfather came from there, but that was all he knew of the country and all he really wanted to know. However, it was here where he began to consider God. “I had a strong sense that God was, though didn’t know exactly what God might be.”

Finally returning home to Elko and having read the works of many philosophical authors including Pierre Teilhard de Chardin while isolating himself in a small, basement apartment, he experienced the unity of spirit and God in all living things, a discovery leading to a moral compass and a “mystical euphoria.”

To say that Garcia then came immediately to Catholic conversion is trivializing the rest of his book. Going from no knowledge of God or religion to where he is today as a married man raising five children in the faith while acting as a mid-level administrator at the University of Notre Dame in Indiana is no easy journey, and as I pointed out earlier, he tells the truth about himself, sins and all.

If there is a weakness in Garcia’s narrative, it comes at the end of the book when he relates the challenges faced by the family because of his son. The central force goes from Garcia’s inner struggle and final resolution of finding life in and with Christ to a separate story maybe best tackled in a second memoir. In his last chapter named “Pilgrim River.” I like best his final description of himself. “I see a small-time scholar and a semi-autistic loner, a flawed man who has persistently sought the Holy. The Quiet One.”

Pilgrim River is truly a spiritual memoir for Catholic and non-Catholic readers. Most especially, people with big questions about the existence of God, the possibility of miracles, and the intercession of saints should read this book. It’s value lies in the ability to place us in the austerity of country that fed the spirituality of early desert fathers, and its stories of relationships and forgiveness.