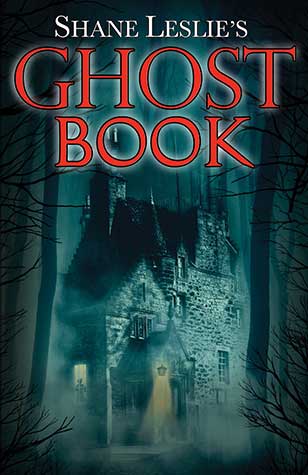 Shane Leslie’s Ghost Book provides what so many of us for so long have been looking for: a book of true ghost stories and supernatural experiences in accord with Catholic orthodoxy. Leslie was an Anglo-Irish man living during the early twentieth century Catholic Literary Renaissance, was well-connected to the Cardinals and lords of Ireland and the United Kingdom. Consequently, he had access to their rich collection of documented paranormal phenomena and communicated under the

supervision of the Church with such organizations as the Society for Psychical Research and the Ghost Club. This book is the product of his investigations.

Leslie grounds the stories in the orthodoxy of scripture and tradition, of terror and of peace. He sets up the well-known Old Testament story of the witch of Endor as an example of an inappropriate way to approach the desire to see souls from the other side. The story centers around an attitude of going out of one’s way to use occult resources to use people’s gifts of a stronger connection to the spiritual world for one’s own gain and satisfaction. Specific instances of this type of abuse are attending seances and playing with Ouija boards for misguided fun, attempting to discover dark secrets and other useless thrills. This can open the door to communication with demons, which doesn’t necessarily mean one will find the apparition one talks in these ways to be a demon, but it does mean such sinful communication can only do harm.

But not all stories of evil beings from beyond begin with a séance. There are a few stories of places haunted by infernal beings who take possession of a place because of its violent history. These stories are often divided into hauntings by poltergeists, mostly lower level fiends who throw things around old houses and occasionally set things on fire, and higher order beings from hell who can terrify a whole household. Usually, the rite of exorcism works to cast away such ghouls. On the whole, these stories aren’t as frequent, both in this book and real life.

Most involve interactions with good ghosts. Shane Leslie presents a plethora of stories from saints and devout members of the church interacting with ghosts. The difference between these stories and experiences harmful to the soul’s salvation is that the soul from across the veil begins the communication. These stories show that God in His great mercy allows some souls after leaving earthly existence to appear on earth again in certain places or to certain people in order to send some message or accomplish some task for the greater glory of God.

Honestly, those ghost stories are the stranger ones. Most ghosts are simply reminding this or that priest to say a few more prayers or masses that had been promised them while they were alive. Sometimes priests themselves come back to say a Mass or finish off a string of prayers they meant to say. Convents will often have stories of the souls of nuns coming back to finish scrubbing the floors.

Some ghost stories come from people promising to visit their friends from the afterlife, and then actually doing it. Ghosts of children often make their joyful presence known through song, often mass chants. Every now and then a spirit will need something taken care of they could not in their last moments, often some piece of paper with things not needed to be known, like an old list for confession, that needs to be burned. And sometimes a person’s ghost will appear to their loved ones immediately following a horrific yet accidental death, their way of preparing their family for their grieving.

Shane Leslie’s Ghost Book presents a true assessment of real ghostly interactions brought about by the mercy of God to bring peace for the faithfully departed and affirm the faith of those on earth. Ghost stories are a witness to the power and efficacy of prayer as well as a reminder of the real goal of this earthly life: a life with God in heaven.

Audience: Everyone, especially people who think they know what they’re talking about when they talk about ghosts. It might be tough for children eight and under to read this book mostly out of skill level rather than story content, but then again some eight-year-olds are smarter than eighth graders.