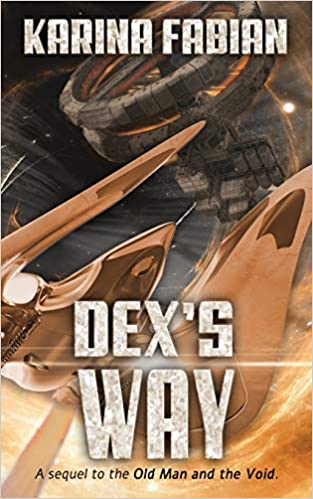 Ernest Hemingway’s The Old Man and the Sea ends with the old man making it back to shore, but the giant fish he caught is eaten away by sharks so much that by the time he makes it back his catch is practically worthless. Fabian is not as nearly as dour, and while the first book, Old Man and the Void does end with Dex making it back out of the wormhole much like the old man of Hemingway’s book, the sequel ending she has crafted leaves the Hemingway inspiration behind for a truly satisfying ending.

Because of the time dilation, the world that Dex finds himself in is no longer one he recognizes. While he was in the wormhole 600 years passed, and humans met and integrated with the Elomijan civilization that built the ancient war drones Dex had to fight off while he was in the wormhole. Dex has to adjust to a new world, a new body and possibly a new romance, but what he really wants to do is find the AI Santiago that helped him survive not just the black hole but his grief as well. At least this new body of his has freed him from the memory-disease he suffered from in the last book.

Fabian also writes Star Trek parody books and the influence of Star Trek is very evident in this story. Dex’s adventure felt like something that could happen on an episode with Spock and Kirk. As someone who has read many alien-world stories before, I found Fabian’s technique for conveying culture shock to be very unique. Instead of being constantly amazed by new technologies and races (though there is some of that), what confuses Dex most is how social mores around conversation have changed. He is flabbergasted when, during a stay at a hospital, he drives his kind nurse to tears simply by answering her questions with a simple ‘yes’ or ‘no’. It doesn’t help that many of this new civilization think he is the fabled Huntradex who appears as the herald of a new age in their history. Their reverence for him makes it difficult for him to acquire a useful teacher. There have been other black-hole treasure hunters who have come back after 50, even 100 years but none were gone so long nor traveled so deeply as Dex did.

Eventually he does start to adjust, learn the rules and even make friends, namely a young historical researcher writing a paper on him, a broker helping him to sell the relics that he made it out of the black hole with, and a talkative man named Serani, who strongly resembles a young St. Francis of Assisi. Although Dex dislikes these whispers that he is some mythical herald of a coming prophet, his friendship with Serani ends up leading both of them to achieve things they never expected.

If you are a fan of Star Trek, or classic science fiction you’ll find this an easy and fun read. Though Fabian is a well-known comedy writer this book proves that Fabian’s talent is far more versatile than just that genre. From black holes to alien worlds, this adventure was an immersive ride that greatly deserves its only adaptation into film.