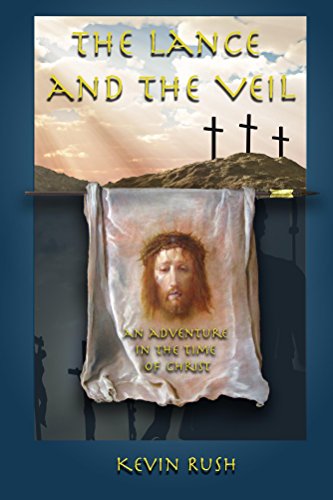 A fearless woman comes out of the crowd to wipe the bloody, battered face of Jesus as he carries his cross. As she pleads with Jesus the innocent victim to perform one last miracle and save himself, he affirms, “Not my will, but my father’s.”

The woman, as identified in the sixth station of the cross, is called Veronica meaning “True Image,” who, through an amazing story written by Kevin Rush in The Lance and the Veil, comes to life as the niece of a Roman senator. In the beginning of the novel, she is a 4 year old orphan following the murder of her father and the suicide of her mother. Adopted by her uncle, she grows up with her cousin Claudia who is subject to having strange dreams, important to the plot because her future husband is the young, ambitious Pontius Pilate.

Having established the backstory of the first main character, Rush introduces Longinus, another ambitious young man who like Pilate, appears to be quite ruthless in controlling situations that will help him achieve his goal, that of becoming an important Roman Centurion.

Veronica and Longinus meet when the political situation in Rome becomes precarious between Veronica’s uncle and the emperor, Tiberius Caesar, who orders the execution of the whole family. As they flee to safety under the guise of a merchant family, they encounter Longinus who recognizes the senator and knows this is an opportunity to earn favor with the emperor. During a vicious sword fight, he seriously wounds his opponent just as Veronica emerges from her hiding place.

Longinus falls in love at first sight with Veronica. He knows as part of the family, she must be killed too. However he also is aware that she is a virgin, and according to Roman law, she can’t be killed until she is despoiled. If he takes her back to Rome, he knows she will be given in pleasure to other soldiers first.

In order to save her, he defies the orders of Caesar and allows the merchant and his family to go free despite the fact that this puts him in danger for disobeying orders. Thus we have the makings of a love story that may or may not be true but that goes beyond the formulaic boy meets girl theme as it become intertwined with the story of Jesus Christ, his crucifixion, and resurrection.

Rush weaves history with Scripture, church tradition, and legends to relate the story of Veronica and Longinus who are both known in the Catholic Church as saints. His historical fiction novel is exciting, filled with adventures based on an imaginative view of events that can be found in the Bible. He doesn’t flinch at portraying the violence in the Holy Land during the time of Jesus.

Veronica and Longinus realize that they love each other but know that their lives are quite diverse and filled with many conflicts. Veronica is witness to miracles performed by Jesus and believes in his divinity while Longinus, now a Centurion, sees Christ as just another radical Jew who is condemned to die by Pontius Pilate.

The climax of the book comes at the foot of the cross, when Longinus, who has been blinded following an attack from a zealot named Barabbas,  is healed by the blood and water that splatters him as he sticks his lance in the side of Jesus. Longinus believes and declares, “Truly, this man was the Son of God.”

Longinus and Veronica are converted to Christianity. But who knows if they finally find peace with each other. I think Rush leaves it open to the reader’s imagination. Maybe Rush could write a sequel, and I heartily suggest that it would make a good movie. I recommend this book to anyone, young and old.