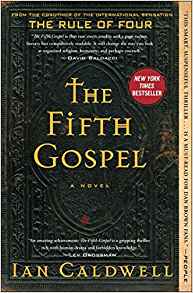 Fr. Alex Andreou is a Greek Catholic priest who grew up in Vatican City. Now as a married priest in the Greek rite of the church, he is raising his son in Vatican City. Life is quiet and lonely until his brother, who also a priest, is accused of murdering one of their friends.

Further complicating matters, their friend had been working on an exhibit concerning The Fifth Gospel, an ancient text that hints at a long-hidden secret regarding one of the church’s most precious relics: The Shroud of Turin, a long piece of burial cloth stained with blood in the shape of a man crucified. In order to solve the murder, he will have to discover the ancient secret his friend died for and avoid getting killed himself along the way.

Now despite that rather bombastic plot summary, this book is NOTHING like The Da Vinci Code. It is NOT a mishmash of heretical misconceptions about history or the Catholic Church, but it is so cleverly disguised as one it makes the perfect gift for your anti-Catholic friends and family.

But this book will do more than dispel misconceptions of the Bible or Catholic history. It is also poignant look into the cultural divide between the Orthodox and Catholic churches. Fr. Alex is a priest in the Greek rite, the son of a Greek Catholic Priest and the nephew of a Roman Catholic Cardinal. He carries with him memories of Orthodox Christians vandalizing and rioting at the doors of Catholic churches when Pope John Paul visited his father’s homeland of Greece, his own brother getting caught in the fighting. Even in Vatican City, he endures suspicious, sometimes angry, glances from bystanders when they see his young five-year-old son run up to a priest and call him “daddy.” Alex remembers his own father tried to instill in him the conviction that being an Eastern Catholic meant being God’s ambassador, “middlemen who could help reunite Catholics and Orthodox. In reality, being an Eastern Catholic can feel like being a refugee at a border crossing between hostile superpowers” (pg 2). This book taught me a lot about Orthodox culture in a unique and empathetic way.

The undercurrent that runs through this book is forgiveness; forgiveness between two estranged churches, epitomized in their apostolic leaders, St. Peter and St. Andrew, and in the book’s two brothers who must learn to forgive themselves as easily as they forgive others. It is a stirring read and is one of the few books that I loved so much I read it twice through in immediate succession. I do not doubt I will read it many more times.

Postscript for those concerned about the heretical-sounding title:

The Fifth Gospel document, for one thing is not a whole new gospel. It’s was document designed by a group of desert monks who sought to merge all four gospels into one single gospel so that it would be easier to read through the entire thing in the course of Sunday masses. The Fifth Gospel (the actual nonfictional document) isn’t an actual new fifth gospel but simply an ancient compilation of the original four. The Church realized their attempt did not work and so instead we have the three year liturgical cycle of Gospel readings we use today. The value of the real Fifth Gospel document is that it is one of the earliest copies of the Gospels we have. Historians and Bible scholars often use it to show that the copies of the Gospels we have today are the same as the ones Christians had a thousand years ago. One of the things that most impressed me about this book was how much scholarly knowledge of the Bible this fast-passed fiction book was able to convey.