The Rose and the Snake by Mark Restaino, Illustrated by J.P. Alcemendas 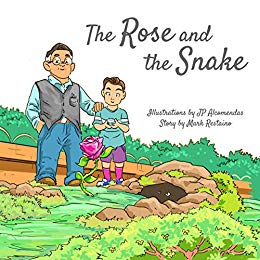 An oddly dark and thought-provoking children’s tale, this book explores themes of vanity, and self-worth, putting a Christian twist on a modern Aesop’s fable.

When the rose is first planted in the schoolyard, she enjoys hearing her planter tell her she is beautiful, but a nearby snake’s snide comments begin to make her doubt that the compliment is sincere because she is a pink rose and not the traditional red rose.

The snake offers to help her turn red if she will shed her thorns and let him out of the burrow whose entrance she is blocking.

She accepts his offer. In a short time the snake returns with a mouse “friend” who is “just sleeping” but will go with the snake into the tunnel to work on making her beautiful. The naïve rose accepts this explanation. After the snake carries a few more “friends” into his burrow, her petals begin to turn a luscious blood red.

One day, a young boy stumble across her and tells her that he thinks she is beautiful no matter what. He visits her every day, gives her a glass of water and repeats the compliment. After a while, the rose begins to believe him and finds the confidence to realize what the snake is doing and put a stop to him. Young children might find the dark themes a bit horrifying but I do not think most will pick up on them until after several rereads, which will make the lessons learned all the more effective.

At the back of the book, the authors have included a list of symbols in the book; the rose meaning us and/or Mary, the snake meaning the devil, the little boy Jesus etc. At first, I thought the symbolism was obvious and didn’t require a list. However, the indexs could be very useful for engaging children in a discussion after story time. It would help the child learn wisdom but also help them with reading comprehension. As children like to hear the same story told over and over again, this would let the parent engage their child in discussion about one of the different symbols during each retelling, which would further engage the child’s imagination with the story and provide some welcome diversity for the parent. As long as the parent doesn’t give into the temptation to over-explain the meaning this could be a very thought-provoking and moving story for a child. All Christians would find this an edifying book for their children.

Some might be concerned that our Immaculate Lady is listed as symbolic in a clearly flawed main character. My understanding is that the rose is a Marian-type but not a direct exact stand-in for Mary herself. When the rose caves to the temptation of beauty she acts like us, a fallen humanity. (At the back of the book the rose is listed as being both a symbol for ourselves and for Mary.) At the start of the book the rose is like ourselves but when she is brave and stands up to the snake and uses her thorns to lock him in his hole she is acting like a Marian type. The purpose of the symbol is not to say that Mary was tempted or made a mistake but to encourage us to reflect on the good we can do when we act like her and the destruction we can cause when we don’t.

This tradition of typography is evident in the Bible itself where Moses is often cited as a Messianic-type in his deliverance of Israel but this does not exclude him from making the occaisional mistake. Deborah, Judith and Esther are also cited as Marian types but that does not make them sinless like she was. If you are interested in Marian types in the Bible this is an very interesting article: http://www.ignatiusinsight.com/features2006/smiesel_maryandot_oct06.asp

It’s a very deep Christian literary tradition that is difficult even for the seasoned Christian but if you can teach your child fluency in this sort of symbollic language you’ll be setting them up for a deeper understanding and appreciation of the Bible itself.